Back in my misspent youth, I smoked cigarettes.  Back then, it seemed like less of an admission to make than something to brag about.  I haven't touched one in over 15 years, and can't even stand the smell of the things now.  But there is always something that I missed about smoking.  It wasn't the taste, or the momentary relaxation that the nicotine brought, or even the physical action of smoking, though I did at first miss all of those things.

It is the social camaraderie.  As an introvert, it has always been difficult for me to meet people.  Oh, I've come a long way; my years as a research librarian in big law firms has forced me out of my shell, to engage with the much more gregarious attorneys, to find out what they wanted, to be able to communicate my findings.  I've gotten better.

But back when I was younger, I didn't have that life experience.  And I was horrible at meeting people.  I would get tongue-tied, especially around people that I admired, and either say the complete wrong thing, or I would clam up and not say anything at all for fear of saying the complete wrong thing.  Or I would magically lose the power of speech and find myself stuttering some nonsense at them.

Smoking provided a way to meet people.  At that time, we could all stand outside of buildings and smoke, and we would do so.  And you would be instant-friends with all of the other smokers.  Some of those friendships actually became lasting things, sometimes it was just someone to talk to, but as a smoker, you were never lonely once you lit up.  I really, really missed that, especially after I first quit, because I didn't feel like there was anything to replace it with.  There was no way for introverted non-smokers to instantly bond, nothing to bond over.

Until now.  It occurred to me that I talk to a heck of a lot of people when I'm out with the dogs.  There's the people who aren't with dogs, but either have one waiting for them at home or would love to have one but can't.  They seek me out and beg me for permission to pet my dogs, ask me questions about them.  Then there are the other people with dogs on the other end of the leash.  There's an instant bond there as well...  you know.  Eyes meeting, wry smiles as our dogs thoroughly sniff each other from head to tail.  Or as one or all of them start their synchronized pooping.  Swapped stories, suggestions for good walking places, rescue tales.  Most people approve very highly of the idea of rescued dogs, and tell me so.  They frequently have questions about the racing industry once they find out that I have ex-track dogs.  It happens nearly every morning.

I had imagined long, solitary walks, just me and Argos, when we first got him (our first dog) and the thought really appealed to me.  The reality is, when we take our morning walks, I find myself talking to no less than six or seven people a morning.  Sure, sometimes it's just a few words, sometimes it's more.  And that reality is far better than my solitude ever would be.  It forces me out of my introvert shell, encourages me to meet people's gazes.  And honestly, the presence of the dogs means that I usually see a person's good side.  Dogs bring out the good in most of us, I believe that with my whole heart.  People are gentler, kinder, softer-spoken, less inclined to argue with me when I have the dogs.

So yes, for me, dogs are the new cigarette.  They are the perfect way for this introvert to meet people, or at least, to meet dog-lovers.  (I am fairly certain a couple of people do cross the street to avoid us, so I guess I won't be meeting them anytime soon.  Then again, there were always people who actively avoided the smokers too.  My analogy holds... yay!) 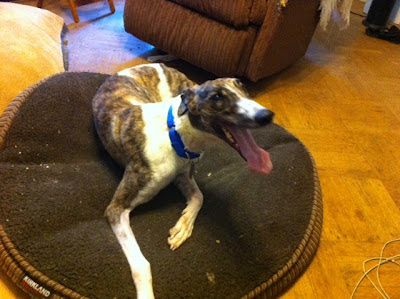 Anyway, this left-field thought is brought to you by the letters A and M.  And out of my strong, strong desire to write or do anything to avoid checking the news sites and getting my daily blood pressure increase  dose of politics.
Posted by House of Carnivores at 4:09 AM