It's been a busy, difficult couple of weeks, and once again I have been a Bad Blogger (TM) and not keeping up like I would like to.  So if I've neglected your blog lately, mea culpa.  I hope to do better.  Real life is a bitch sometimes, it really is.  We've had another death in the family, Jeff and I both got colds at the same time (which are NOT turning into bronchitis, yay!) and it just got really busy all at once.

However, there have been some periods of joy and peace that helped get me through.  I'll show you some of them.
It snowed last weekend.  It certainly wasn't a lot by normal Pennsylvania standards (three inches, maybe?) but it has been the most that we've gotten all winter.  It started Friday night and snowed most of the day on Saturday... just enough to keep the road in front of our house slick, and killed any desire that I had to leave the house.  So.  My simple solution was:  I didn't leave the house.  I stayed home, nursed the last of my cold, and enjoyed the time with my husband and the animals.  I had just found out about the family death, and it was a nice way to quietly grieve, far from everyone else's view. 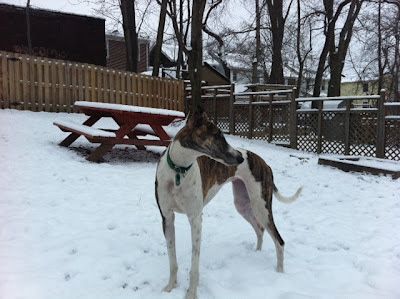 TWO weeks ago (before the snow) I met two dogs that were up for adoption at Steel City Greyhounds.  Sophia is the white one with the brindle patches.  She has since been adopted.  Fly Rod, the handsome black male, still needs a home.  Know someone in the Pittsburgh area that wants a dog?  Tell them about Fly Rod.  He's a gentle, affectionate, unassuming dog...  the perfect pet. 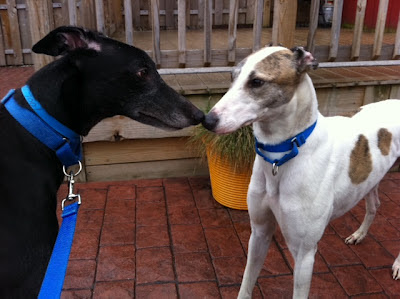 Know someone that wants to adopt a dog but doesn't want a greyhound?  I have another suggestion! 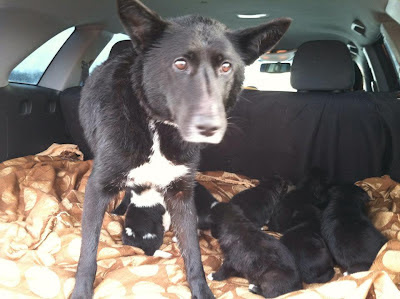 This Mama dog and her nine puppies were found abandoned by the side of the road in rural Western Pennsylvania.  Fortunately, they were found by dog lovers, and brought back to Pittsburgh.  The puppies have been weaned and have all found homes, but poor Mama dog is still waiting for her own place!  It is thought that she is a German Shepherd mix, and she's only two years old herself.  If you know someone who might be interested, direct them to me and I'll put them in touch with the rescuers!
The cats are doing well.  I haven't taken many pictures of them lately, something that I must rectify this weekend!  Here is one of Annie that I just took tonight, which makes me laugh.  It's not the highest quality photo, but still makes me smile, and it shows her eyes!  (Annie is notorious for averting her eyes when it's picture time.  That and the black fur makes it difficult to photograph her face to begin with.)   It's Annie's "Well?"  look.  She wants gooshey food.  Frequently, this is the first thing that I see in the morning, two inches from my eyeball.  Yikes! 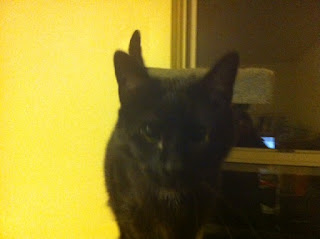 And this weekend, we're going to have one more cat in our house.  He is being fostered by another foster mom while he gets fattened up (he was found stray, and starving.)   He is just staying at my house for a few days, then is returning to her.  I haven't even met him and I can tell that he's a real sweetheart of a cat.  Take a look at this picture! 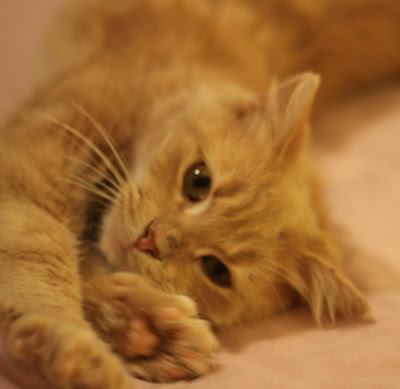 See?  I can let cats that aren't shades of black and gray in my house.  I can!  (Seriously, I have no color preference.  It just happens that my cats are all black, white, and gray, and up until now, all of my fosters have been black, or black and white. Coincidence only. )  This guy's name is Eddy.
I will talk more about him this weekend, after I get to know him a little.
I hope that everyone is having a good week!
Posted by House of Carnivores at 6:57 PM