As some of you have read, in March 2011, we took in our first foster animals.  And we've had a few here and there ever since.  I thought it might be nice to have a yearbook of House of Carnivores Alumni, and a description of where they went, if known. 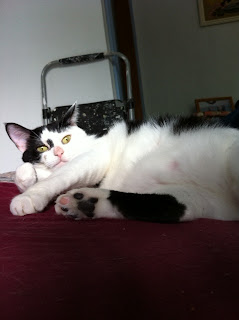 Patches.  This was one of our first fosters, part of a pair of cats.  They needed a home to hang out in so that they could ride out a six month quarantine.  (They were perfectly healthy, it was just done out of an abundance of caution.)

When I heard that there were six cats that needed quarantine, I quickly talked Jeff into taking two of them.  I went to the shelter early one Sunday afternoon in March 2011, and chose Patches as one of the two.

Patches is a great cat.  He's friendly, talkative, a little bit bossy, and loves other cats.  I thought I was going to be sad to see him go, but his situation is the best that I could have ever asked for... he went to live with my Mother-in-law.  So I know he's in a good home, I know he's happy, I get frequent updates, and I even get to see him sometimes! 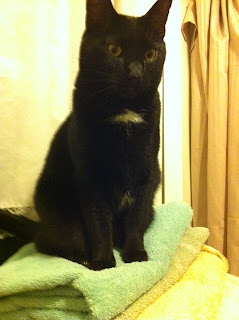 Mitchell.  Mitchell was the other half of my first pair of fosters.  I picked him and Patches out of six cats.  He just seemed so cheerful and happy.  And that was true of life with him in our house as well.  He was friendly, undemanding, relentlessly cheerful, loved other cats, and even let Patches bully him around with a pretty good attitude.  He talked loudly, and was lavish with his affections.

The quarantine ran out in September, and we continued to foster him until his adoption in November 2011.  I did get one update from his adopter, and it sounds like Mitch has settled into his new home well, gets along with the resident cat, and is very happy.  Even if I never do get to see him again, just knowing that he went to a home where he is loved and enjoyed makes me happy.  My job is done, and I can feel satisfied. 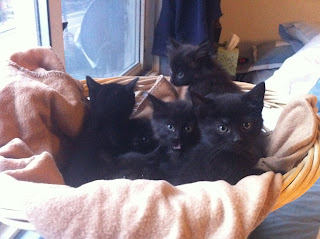 Litter of Kittens, The First.  Although both Jeff and I were fairly confident that adult cats were more our speed, we agreed to foster a late litter of kittens in December 2011.  This batch of all black kittens was a real joy to me.  They were wild and crazy and practically tore my bathroom apart, but they were sweet and loving and had no fear of me whatsoever.  This is the litter that caused the infamous "shower scene" in which, while showering, I opened my eyes to see a kitten, hanging from the shower curtain at my eye-level, staring in at me with wide eyes.  Yes, I screamed.  Their names, which we were allowed to choose:  Ophelia, Hamlet, Horatio, Ellie, Violet, and Lara.  They went up for adoption in early January, and since they were the only kittens in the shelter, were adopted very quickly. 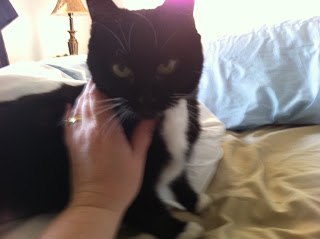 Junior.  This little tuxie girl was so shy when she came to me in Februrary 2012, that I couldn't handle her.  She hid under the bed, and only came out to eat and use her litter box when she was absolutely certain that we humans weren't around.  I had her for about two months, while she grew her fur back in from an episode of alopecia.  She slowly grew to trust me, and I fell in love with her sweet, shy personality.   I had her housemate Tom with us as well, though to date, he still lives with us.  She went back to the shelter and went up for adoption.  She did stay at the shelter for about a month, but I was told that she was adopted by a very nice woman who wanted a quiet cat.  I hope that the pair of them are very happy together. 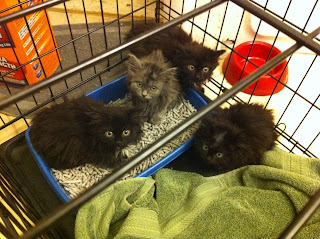 Litter of Kittens, The Second. In June 2012, I agreed to foster another litter of kittens.  The shelter had about thirteen litters in the back room that needed to go out to foster, and were in desperate need of a few willing foster homes.  This was a litter of four.  They had been strays, and were absolutely terrified of being in our house, of us, of the dogs.  In the weeks that we had them...  about five weeks, I think, they grew to trust us, and were playful, snuggly little cats.  We named them Jeannie, Rogue, Logan, and Storm.  Storm had a torn achilles tendon in the beginning and had to wear an enormous bandage on her hind leg.  They were all adopted from the shelter, and one (Jeannie) is even with a friend.

Litter of Kittens, The Third.  In late August, 2012, I agreed to "take over" the fostering of a litter of kittens whose previous foster mother had to bring them back a little bit too early due to vacation.  It was meant to be a very short term foster as they were just a -little- bit underweight.  Well, this litter ripped our hearts out and stomped all over them, and were the most challenging foster situation I've ever had.  Oh, the kittens themselves were adorable and friendly and loving.
We named them after explorers:  Amelia, Nellie, Lewis & Clarke.   Because they were constantly sick, their stay with us kept getting extended.  Then Amelia died.  It was our first foster loss, and we were devastated.  Then Nellie started to get frail.  The hammer truly fell when we took the "boys" in to be neutered, and it was discovered that they, and by extension the entire litter, were positive for Feline Leukemia.  Which suddenly explained all  of their health problems.  We got them healthy, and kept them in our house under strict quarantine for several more months while the shelter tried to find placement for 3 FeLV+ kittens.  And then miraculously, someone who already had a FeLV+ cat found my blog.  And even more miraculously, decided that she would take all three of them.  I'm thrilled that they found a loving home, because they were adorable kittens.  They certainly didn't know that they had a contagious disease.

The Cattens.  A friend referred to them as "cattens" once, and it stuck.  They weren't kittens - but were very young adults, and were all from the same litter.  There were also four of them.  The shelter was very full at the time, and they needed some cats to be taken out for a brief foster period just long enough for some additional cages to open up.  Their stay with us was extended a bit by the fact that they all came down with URIs and eye infections two days after coming home with me.  We named them after poets:  Emily, Edgar, Christina, and Dante.  They were adopted very quickly from the shelter once they were returned, and even in pairs!  Emily and Christina went together, and Edgar and Dante went together.  Really, it was the perfect solution for just the best young cats ever.

Sally:  We took a bit of a break after fostering the "cattens" but in February of 2013, an 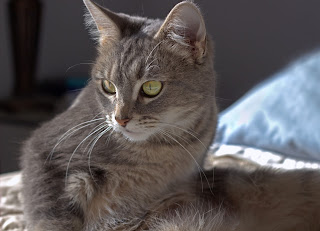 email went out to the foster group.  Could someone take in a behavioral foster?  She was hissing and swatting at customers, and they wanted to get her out of a cage and into a home to see if that improved her attitude.  She hid from me in my closet for about a week, hissing at me.  And then suddenly decided I was OK and turned into the snuggliest, most affectionate cat.  She was adopted straight from my home, and I got an email a week later from her adopter, reporting that she had adjusted very well, and that they loved her, with several happy pictures to make me smile.

Litter of Kittens, the Fourth:  In April 2013, I brought home a litter of kittens, only 3 days old!  (They came with their mama.)  The first few weeks of fostering a mama cat and her kittens is EASY.  The kittens aren't mobile yet, and she does most of the work.  The challenge comes when the little guys are able to run around and get into trouble!  They were all adopted in June 2013.  The babies names were Lemmy, Samantha, Lita, and Joan.  Their mother is Janis, but is still with us, as she is severely undersocialized.