I noticed that my last post was made back in November, when Argos had gotten a dental cleaning/tooth pulling, and had a lump excised from his forehead.  (The lump turned out to be cancerous, but fortunately for all of us, *knock on wood* it hasn't come back.)

Well, I pick up today, the day after Maera went in for a dental cleaning.  She is young enough and her teeth strong enough that there wasn't a need to pull any but she had a serious case of gingivitis and needed a serious cleaning to get those teeth white again and make her breath better than a carrion-eating bird, good god it had gotten bad.  :(  I feel bad about it, but I did truly try to keep up on it, but her genetic disposition towards bad teeth was too much for me I guess. 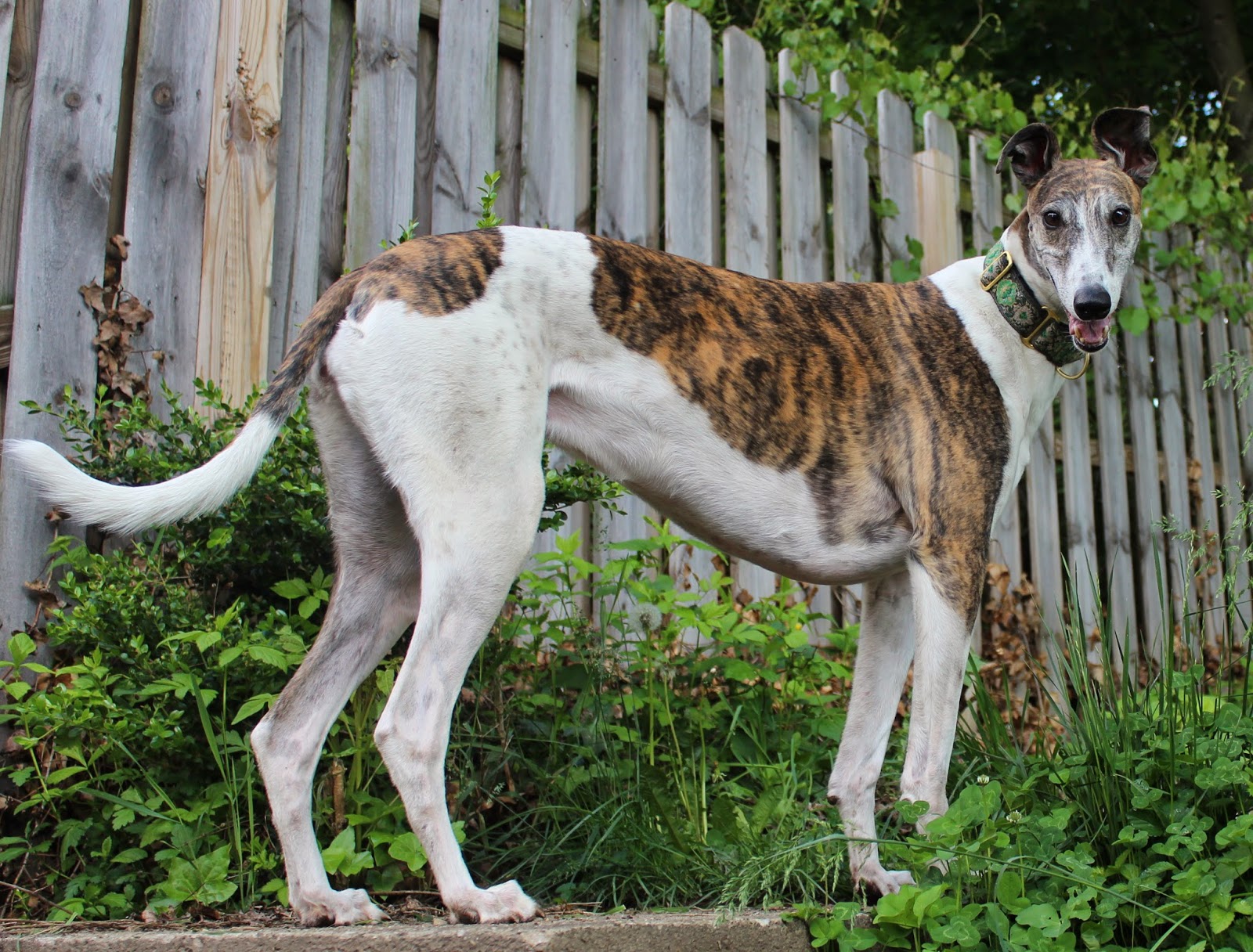 She was actually the only dog in for surgery yesterday, so I got a call from the vet at about noon to say that it was over, she was coming out from the anesthesia, but we should give her a few hours to fully wake up before we came to pick her up.  We showed up at 4:00 and she was ever-so-happy to see us.  She towed the vet tech across the lobby and jumped up threw her front legs over Jeff's shoulders like she was saying "Oh god rescue me, take me home!"

She was a little subdued for the rest of the night, but was willing to eat the little bits of food that I gave her.  (And ate a full breakfast this morning.)

So, that's over, as well as several hundred dollars I'd set aside in savings.  *sigh*

It's been a crazy few months...  I don't remember if I posted about it back in the fall, but I was accepted into the Penn State Master Gardener program, and attended classes an various aspects of gardening for several months.  In April I took (and passed) my final, and now I'm in the process of "paying" for the education with 50 hours of volunteerism.  (I will be required to do volunteer hours in subsequent years as well.)  There are no worries about me hitting it, as I believe I'm at 45 now.  BUT it's kept me very busy and was just one more reason to not write on the blog.

So...  to give everyone a highlights-only rundown.

Last April we took in a scared, angry mother cat and her newborn kittens as fosters for the local shelter.  The kittens went back to the shelter in June, and were adopted quickly, but we kept the mother with us because she wasn't yet adoptable - she hissed and hid if one of us so much as entered her room.  We named her Janis, after Janis Joplin.  (Her kids were Samantha, Lemmy, Lita, and Joan.)  She got friendlier and friendlier as the months went on, though she still refused to deal with any of our friends when they came over, preferring to hide upstairs until they were gone.

In December, a woman contacted me about meeting Janis.  Janis didn't put on a -great- show when the lady came to my house to meet her, though it wasn't a terrible failure.  She was wary, and probably would have run if I wasn't holding her, but did tolerate some petting, and even consented to sniffing the woman's finger.  That lovely person decided to give Janis a chance, and adopted her the next week!  And she's been kind enough to give me a few updates, and it sounds like Janis is settled into her home very well, and is happy and relaxed with her new mom and feline sister.  So, great news!

We haven't taken in any more fosters.  We have a lot going on right now, and don't feel that we can devote the time needed to them... they need more than a roof and food and water, they need care, and play, and affection and TIME.  I always view it as my duty to return my fosters a little bit better than I got them, unless it's a truly short-term gig.

In March, Argos turned 11, which truly puts him in his twilight years. This fact makes me incredibly sad, though I try not to dwell on it.  As you can see below, someone forgot to tell him that he's elderly.  (This picture is of a game that both he and Maera enjoy playing - it's called "run towards Mom at top speed and only veer away at the last second when she sees her life flashing before her very eyes.")  Such a look of delight on his face. 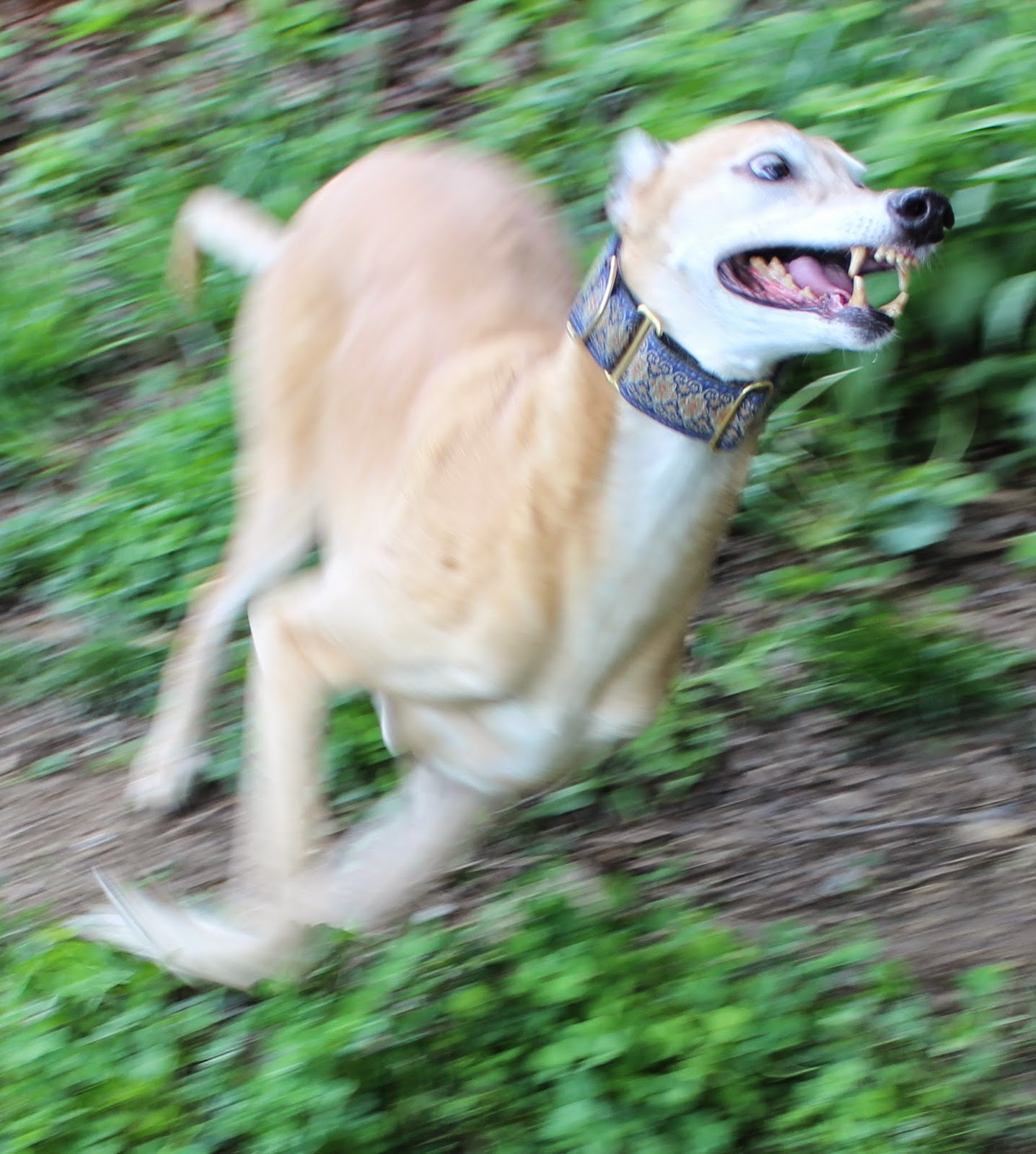 He's doing very well, though he had a really rough week last week due to the daily thunderstorms - he's always been afraid of them, but it seems that the older he gets, the worse he  is about them.  I don't usually like to "drug" him but we gave him Benadryl a few days last week just to calm him down enough that he could get some rest.

The cats have settled into a truce, at first a bit uncomfortable, but getting better and better as time goes on. 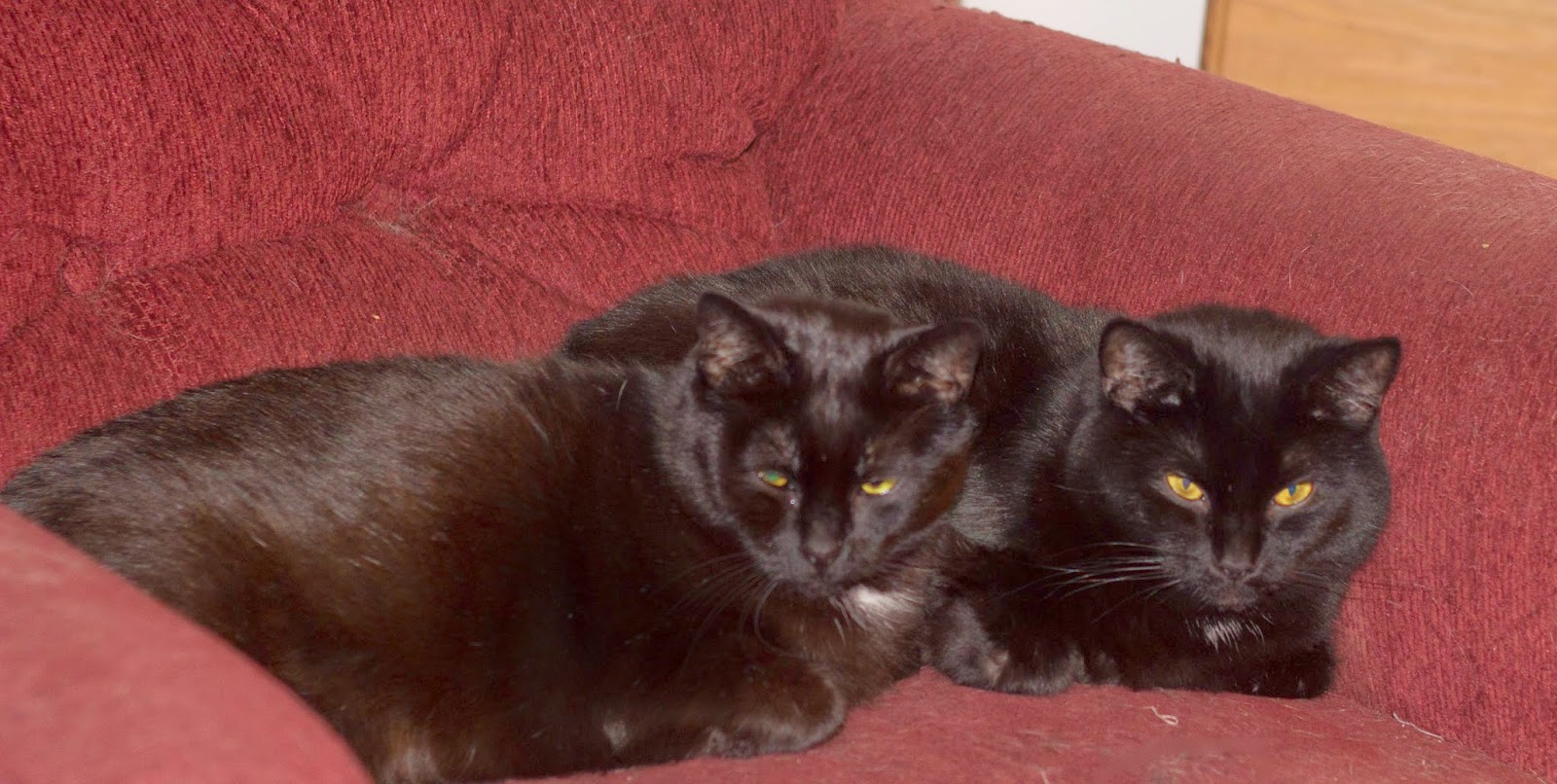 Annie has become queen since Charlotte's death, and her new consort is Batman.  Every once in awhile she still cuddles down with Bit, but for the most part Bit keeps to herself, preferring to stay away from the other cats unless she is tormenting one of them. 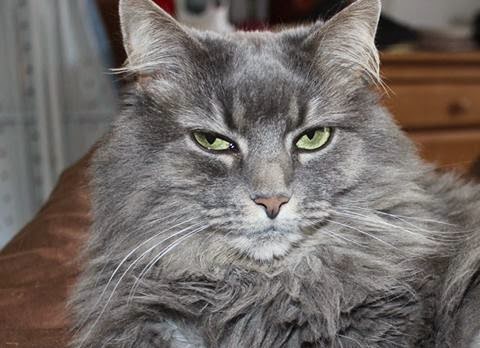 The cats have enjoyed good health, and they seem happy and relaxed with one another, unless Bit is on one of her mean streaks.  This is another reason I haven't been fostering - even a single foster cat brought into the house and placed into quarantine is enough to throw off the balance, and our cats will go back to hissing and spitting at each other.  It's been a lovely, quiet time.

Not that I will never foster again, but I think we're all benefiting from a nice long break.  Even if I am already heart-broken at all of the pleas for kitten fosters.  It's only May.  I have a feeling that "kitten season" is going to be a tough one this year.

I hope that everyone else is doing well.  I am going to read some blogs on this nice long holiday weekend, to try to catch up on your lives, and the lives of your beloved furry friends.
Posted by House of Carnivores at 2:37 PM