Really, at this point, everyone should know that when I "go silent" for several weeks at a time, I'm probably fostering again.  I've tried and tried, but it's a major strain to work a full time job, deal with the commute, tend to my own pets, then tend to a foster, THEN blog.  Sheesh, I'm lucky to be able to throw in "take a shower" or "cook a meal" or "do the dishes."

But, all of that aside, I am indeed fostering again.  This time it's only one cat, whose name, you may have surmised, is Sally.

I was on my way home from work one night on the bus, and checked my email on my phone.  There was a message that had been sent out to the foster list, saying that a cat was not doing very well in a cage, and had started hissing and swatting at people.  But once someone picked her up and held her, she curled up into a little tiny ball in their lap and just tried to hide from the world.  She was obviously frightened out of her mind, and could a foster please PLEASE step up to take her in and give her a quieter environment.

Well, that story tugged at my heart-strings, so I emailed to say that I was willing.  And...  two hours later, I was loading a very frightened little gray tabby into my carrier and taking her home.  I remember being worried about transporting her because the temperatures were down in the single digits that night, so I had the carrier in the front seat with me, with the heater blasting.  I went through a drive-through to get dinner to take home, and Sally complained, quietly but steadily, the entire time. 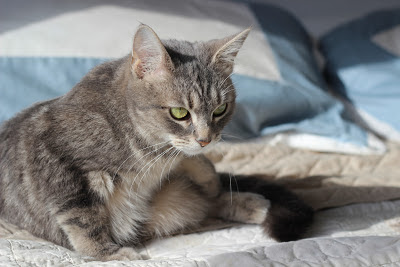 As soon as we let her out of the carrier in our guest room, she hissed at us, and ran into the depths of the closet.  Having dealt with scaredy cats before, I knew to leave her alone for a time, and just got her litter box and food and water dishes ready.  Then we turned the lights out and left her alone for the rest of the night.

I was, as I always am, immensely relieved the next morning to see that food had vanished and the litter box had been used.

It's taken us a couple of weeks to earn her trust (made a bit more difficult due to the need to give her daily antibiotics for part of that time.)   She likes to hide in a little blanket-lined basket that I have in the window; when I come into the room all I can see are the little white tips of her ears.  Sometimes she goes into the closet, if something scares her.  But wherever she goes, she is eager to jump over on to the bed to snuggle up to me when I lay down.  She purrs and kneads the bed, rubs her cheeks on my hand, and will eventually go to sleep like that.  Sometimes she will even sleep on top of me.

She's finally stopped trembling when I pet her... when she first started "coming around" she'd lie there purring  when I was petting her, but she'd be shaking like a leaf all throughout.  Talk about conflicted! 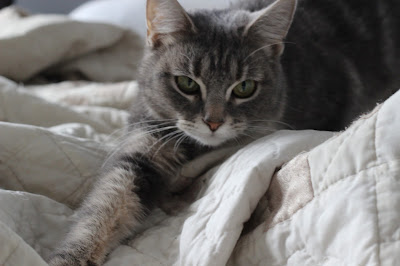 She is still very easily frightened though.  If you move too quickly, she might still hiss and run.  If she hears the dogs racing up the stairs (even though she's safely shut away from them) she gets nervous.  She gets nervous and hides if we talk too loudly, or if a toilet flushes, or if my phone makes any noises when I'm in with her.

I think it's just going to be a process.  And every time I start to get discouraged about it, I remind myself of certain OTHER scaredy cats that I've encountered.  Annie.  Thomas.  Junior.  They all came through it, and so will she. 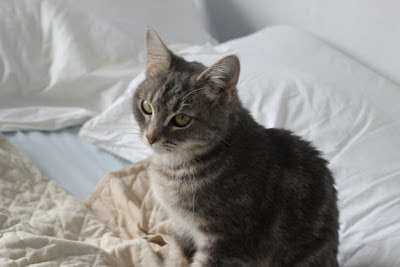 Everyone send good thoughts Sally's way!  We need to convince her that the universe is not actually out to get her, no matter what her past might have been.