We have all gotten to where we are in our lives by making certain choices.  For choosing to walk down certain roads and not others.  This can of course be both to our benefit and our detriment, depending on where the road leads.

But have you ever found yourself wondering how your life would have gone if you'd chosen a different road?  It might not necessarily be better or worse, but it would certainly be different!

This weekend with Charlotte has made me think a bit about that.

I made a post a few days ago that the new vet told us that Charlotte's congestive heart failure diagnosis could have been incorrect.  There was really no good way to know until and unless we were willing to take her off of all of her medications and just watch to see what happened.

This left me disconcerted to say the least, and very concerned.  But Jeff had another talk with the vet last week, and she reassured him.  She told him that we would most likely know within the first 24 hours of taking her off of the meds...  if she started having labored or shallow breathing, that we were to put her back of the lasix immediately, and that it would help her within half an hour.  We just needed a weekend where someone could be home with her for a few extra days to watch her.

I will admit, I wanted this time to be comfortably in the future.  While it would be fantastic to confirm that she does not have heart failure, the idea of taking her off of the medications that we'd so diligently given her every day, twice a day, for the past three years under the assumption that not to do so would be to kill her made me sick to my stomach.   But we realized that we would not get another weekend like this one for awhile.  For my husband, it's a long holiday weekend.  (Alas, this is not the case for me.)  So I reluctantly allowed myself to be talked into it...  on Saturday morning, we withheld her first dose.  Saturday was, to say the least, stressful for both Jeff and for me.

And she's fine.  It's now Sunday evening, nearly 48 hours after she got her last dose.  Her breathing hasn't changed a bit, her attitude is the same, her eyes are bright and alert.  So...  I really don't know what to think at this point.  (Well, Wahoooooo! comes to mind, but it may be a bit premature for that.)  We're going to need to schedule another appointment for her with the vet soon now, so that we can talk about our options going forward.

One thing that I put my foot down about:

Which leads me to my "road chosen" thoughts.  I guess we could have brought her home from the hospital with just the pneumonia antibiotics, and refused to put her on the heart meds, but at the time, we thought (because we had been told by veterinary people) that the meds were needed to keep her alive.  I'm not sure that under those circumstances I would have been able to choose any differently.

Our choices that week were to

1) Go ahead with the recommended treatment, and that meant accepting the congestive heart failure diagnosis.

2.)  Euthanize.  Because at that point, the lady could not breathe on her own.  It would have been an easy solution.

3.)  Take her home without the meds to see what happened.

Really, from my perspective, there's not much of a choice there.  Of course we were going to take the recommended treatment option.

I don't know where the future leads, but Charlotte's may have just gotten a bit longer.  THIS part makes me happy.  I will try not to think about the thousands of dollars that we have spent on veterinary care for her.

The road that I chose made me feel tender and protective and grateful to be with Charlotte.  I tried to treat every day spent with her as a gift, because I didn't know how many more there would be.  And really, that's the way that we should feel about all of our pets.  Not just the ones that we think are terminally ill.  You never know what is going to happen, and you should soak up every bit of love and friendship that you can.

And if the cost of that lesson (for me) was thousands of dollars in feline medical care, then so be it.  I will call it money well spent.

I can only hope that on some level, Charlotte feels the same way. 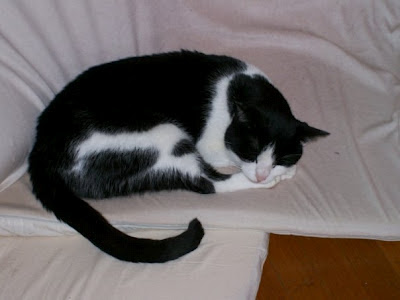 The above is a picture that I took of Charlotte the first day she came back from being hospitalized.  I didn't think she had long to live at the time that I took it.  Can you feel the love?  I can.

My short-term foster cat that I was looking after for another foster parent was not feeling well this weekend, though he didn't let that keep him down.  He was snuggly and purring and affectionate the whole weekend...  only, I had to take him back to the shelter clinic this afternoon, since his symptoms were still bugging him.  They're keeping him there.  Everyone keep toes and fingers crossed that he's feeling much better soon!
Posted by House of Carnivores at 4:58 PM