I don't really have time to make a long, thoughtful post, so I will give you the high points of life in the House and leave it at that.

1.  Charlotte has been off of all of her medications since Saturday morning and everything seems to be great! This has completely boggled my mind, and I'm slowly getting accustomed to sleeping the night through again instead of leaping up every couple of hours to check her breathing. (yay!)

3.  Argos, if I have never mentioned this before, has really, really bad teeth.  The vet recommended another dental this year, even though he had one last year.  I scheduled that for mid-March.  (boo!)  But also (yay!)  His teeth are getting rather brown, despite my brushing attempts, so I know that it's a necessity.

4.  I have another couple of foster cats in the house.  They're shy cats, and spent the first part of the week hiding under my bed.  I was just starting to despair, when Tom, one of them (a tabby boy) came out last night to get petted for five seconds before running back underneath.  Tonight, he stayed out for half an hour, demanding loves and attention.  He climbed all over my lap, pranced across my laptop keyboard, attempted to steal and eat my jelly beans (!) and proved that Charlotte is not the only cat in the house with a plastic bag fetish.

The other, a tuxie girl, is still very standoffish, but was watching Tom's interaction with me curiously.  She did let me pet her, briefly, which is progress.  (yay!)

No pictures of the fosters yet.  Tom kept bumping his head into the camera and knocking it out of my hands, so I finally gave up and just let him soak up the attention.  He does insist on one thing:  when you are petting him, you are required to use both hands.  Nothing less is permitted, LOL.

Now, here is a picture of Bit, who I have said nothing about.  I'm putting it up for the simple fact that she's darned cute.  She does sleep on top of me almost every night now, though... in fact, if I am slow to get to bed, I get a rather vocal scolding. 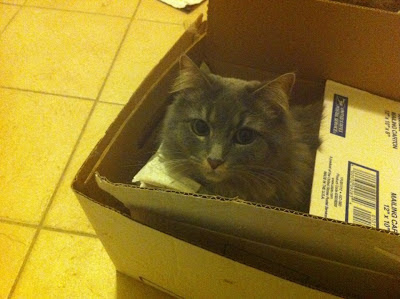 Posted by House of Carnivores at 7:18 PM