One thing that I've mentioned on this blog a couple of times is that Maera came to us with an... issue.

That is, she would get so excited to see us when we came home (even if we'd only been outside for 15 minutes) that she would literally pee all over the floor as she danced around, butt and tail wagging.  Sometimes, even when we were both home, she'd race into the room that we were in, tail wagging excitedly, and pee on the floor at our feet.

To say that this was frustrating is an understatement.  Jeff had to deal with the majority of this, because he was the one to get home first on most nights... poor guy.  Because when you have two large dogs excited to see you, and pee is involved, pee also gets stepped in and then tracked all over the place.  Need I elaborate any further?  We went through a couple of large-sized jugs of Nature's Miracle cleaner, that's for sure.

I think that we've dealt with it.  Finally.  After six months.

So here are the facts, as we understand them.

-  This is not unheard of, though not extremely common.  When it does occur,  it seems to usually be with young, submissive female dogs, across many different breeds.  That description fits Maera perfectly.

-  The common wisdom is that the dog "grows out of it" eventually as she gains confidence.  The pee comes from two issues.  One:  separation anxiety and the corresponding joy upon us returning.  Two:  extreme desire to please.  As bizarre as it seems to us humans, dogs often urinate to show submission.

-  Which means, everyone from internet dog gurus to the obedience trainer that we trained with back in the fall told us, Do NOT yell at her for it.  It will only make the desire to show submission stronger, which would make her more inclined to pee.  Yelling would have the exact opposite effect that we wanted for it to have.  (And when I say "yell" I actually mean firmly reprimand.  I don't think anybody is recommending that anyone YELL at a dog.)

Sigh.  That is quite a conundrum.  How in the world do you train a dog not to pee upon seeing you if you can't reprimand her for doing so?

We found a winning formula that worked/is working  for her.  It very much seems like it just "turned off" overnight too.   I don't know if it would work with every dog, but I thought that I would post in case someone else is having the same problems.  Our methods might work for that person too.

Despite the fact that just two weeks ago, she stopped doing this just overnight,  I do think that there was a process.  Since we couldn't deal with the pee incidents themselves, except to not react to it at all, and then quietly clean up after it was all over, we needed to get at the root causes.  And each step needed to be built upon.


First came the obedience training classes.  Maera took to the training REALLY well.  She sits like a champ.  Greyhounds don't often like to sit because of the way that they're made... it's uncomfortable for them. It doesn't seem to bother Maera.  It's what she does now if she wants treats, and we've made her sit before mealtime as well, and wait to be told that she can eat.  (We do something similar for Argos, but I have him lie down completely, since he hateshateshates sitting.)  This is where her fervent desire to please is really obvious, and I've learned from these training classes that she is smart as a whip.  I was amazed at how quickly she picked up each new command. 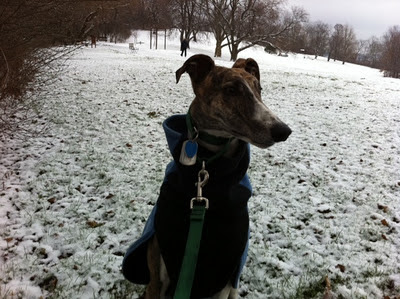 Because Maera  is a young dog, she is a bit of a hooligan sometimes.  She frequently helps herself to the "goodies" in the cat litter boxes, or eats the cat food, if she can get to it.  Or she steals our shoes, my houseslippers, rolled up dirty socks, small pillows, rolls of duct tape, paper towels, any number of things.  So my first instinct when we got her was to keep her with one of us at all times so that we could supervise her and keep her from eating things or carrying off things that she shouldn't.

But this was not helping her separation anxiety.  She was literally with one or both of us at all times when we were home, and was having a hard time coping when we were away.  Thus her explosive (and damp) joy when we finally got back home.

So we decided to start encouraging her to spend time in other rooms if she wanted to.  This was really easy once she discovered our bed.  She loves being on the bed, and tries to stay up there as much as we will let her.  We started letting her jump up on the bed, and then we would leave the room.  She became more and more comfortable with that idea.  Now we can spend time in the study, with her in the bedroom, and no drama. 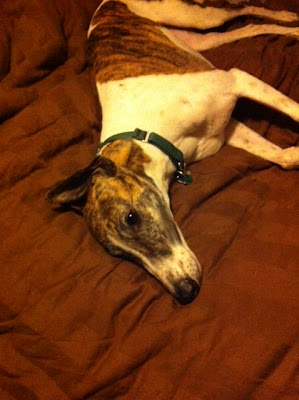 I think that being allowed up on our bed even with us not in the room made her start to be less anxious.  Which meant that her greetings for us when we got home were slightly less frenetic.  Oh yes, there was still pee, and she looked like she was taking off like a helicopter with her tail, but it was somehow less desperate.    Which gave Jeff the idea that she was finally distractable. Maybe, just maybe, we could get her to stop if we could get her mind immediately onto something else.  First, we tried tossing a small handful of kibble onto the floor when we came into the house.  Since she's so food motivated, we thought that she would try to grab up every piece and then be too distracted to pee.  This had mixed results.  Yes, she did try to eat every piece, but sometimes would still pee anyway.  It wasn't distracting enough.  Picking up loose pieces of kibble is pretty mindless.  We needed to engage her brain.  (Remember, as I said earlier, she is a really smart dog.  That brain needs to be stimulated.)

So we combined our obedience training with the new distraction theory.  Immediately upon entering the house, we now present her with a piece of milkbone (or any treat that will take her at least a few moments to consume.)  We tell her to sit.  She knows that she has to sit to get the treat...  and she does.  And, no pee.  It's worked for three straight weeks, every single time. Even with a few days at the pet resort when we were in Jamaica thrown in the middle there.  Like a spigot turned off, if you'll pardon me for the imagery.   God willing, it will continue to work.

If we hadn't trained her to sit before, the milkbone would have never worked - I think giving her a "task" to do to get the milkbone is key here.   And if we hadn't started teaching her that it really is OK to sometimes be alone in our bedroom, I don't know that she'd have ever been able to focus enough on "sitting" for the milkbone.  Not until it was too late, anyway.  It all worked together, with time, and took some patience and thought on our parts.