There are many different methods and techniques for training dogs, and I know that sometimes dog training is the subject of fierce debate.  I've seen a quote a few times, "The only thing two dog trainers agree on is that the third one is wrong."  (I don't know who to ultimately attribute it to - sorry!)  I do know that there are certain techniques that I am more comfortable with than others, and there are certain training methods that I would never subject any dog or cat to.  But I would imagine that one thing that all trainers would agree upon - or should - is that you have to use a lot of patience.

I was talking with a friend this weekend, who told me a story about what NOT to do when training a dog.   He told me that he saw a couple of dogs that were probably pit bulls tethered out in a yard when he and his own dog were walking by.  The dogs started barking at him as he passed.  A woman came outside and called the dogs to her, sounding angrier and angrier when they didn't respond by coming over to her.

Finally, one of the dogs came to her as she was standing on the top of the stairs.  She started yelling at the dog, jerking his collar, and dragging him up the stairs.

My friend said that he really resisted the urge to go over to the woman, screaming in a language that she didn't know, making emphatic hand gestures, etc.  Followed up shortly by grabbing her by her shirt collar and shaking her and continuing to scream at her in that same foreign language while dragging her up a flight of stairs.

Which really brings up a very simple, but often-forgotten point to consider when dealing with dogs.    They're dogs.  They don't understand English.  Just like any other foreigner, raising the volume and getting angrier with repetition does not mean that they are going to be able to understand you any better.  Escalating it to physical violence is also just unacceptable - gently tugging on a dog's collar to guide them is one thing, but dragging a dog up the stairs while yelling at him?  After he did, finally come to you?  I do have to wonder what she was trying for there.  (Actually, I'm sure that her actions were born out of pure frustration.  It sounds like she needs to be trained in dog training more than the dog himself needed training.)

I'm not saying that a dog that ignores his human never understands what he is supposed to do...  my dogs deliberately ignore my commands sometimes, or feign magical, ever-conveniently timed deafness.  I deal with it when it happens, but it needs to be done calmly and patiently.  Without screaming.    But you know?  Sometimes, especially with Maera because she's so young and so new to us, I can see the confusion in her eyes when I'm trying to teach her something.  Screaming at her would not help train her any faster.  It would make her less inclined to trust me.  I know that I would certainly trust someone less if they consistently flipped out on me!  So when I see that confusion in her eyes and see that I'm not getting through, I back off.  Much better to do that than to let the frustration build to the point that I want to start yelling at her.  I'll come back later, after considering for awhile, and try again.  Possibly trying a new technique, one that she might understand better.

I feel sorry for that pit bull that my friend saw, because if the way that the woman treated him was a sampling of how he is typically treated, he is heading down a rough road.

As for training cats, of course screaming at them would be an exercise in utter futility.  Oh yes, I would succeed in cowing them...  with the possible exception of Charlotte, who would just skulk off and begin planning my death.  But I would never actually accomplish anything besides looking like a gigantic bully in my own home.

I'm sharing this, not because I think that my readers go stomping around and yelling at their dogs all of the time, but because of the way my friend shared the story with me - it really made me think.  Yes, I knew intellectually that animals do not always understand our words, but his illustration really made what it must seem like from the dog's perspective crystal clear. 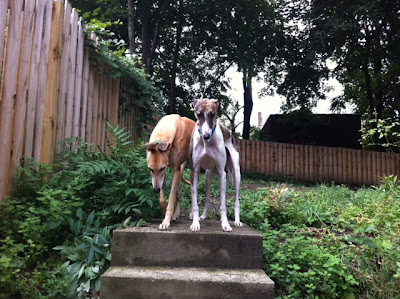 Posted by House of Carnivores at 6:25 PM