Introducing a new cat to the household is a delicate process, full of potential mis-steps and unfortunate misinterpretations.  Believe me, I know.  We had a very rough year when we were trying to introduce poor Romeo into the household, and I truly think that he'd still have to be kept isolated from the others if he were still alive today.

Which is why I felt quite a bit of trepidation with releasing Foster cat Mitchell in with our girls.  I probably wouldn't have done it at all, except that he was desperately lonely after Foster cat Patches got adopted.  So we decided to see what happened.

We had one advantage:  he'd lived here for nearly six months under quarantine already, and the cats were already well aware of the fact that he was here. They had his scent, and despite the quarantine, there were a couple of "jail breaks" so they'd had a couple of Mitchell sightings already too.

So we left the guest room door open one day last week to see what would happen. 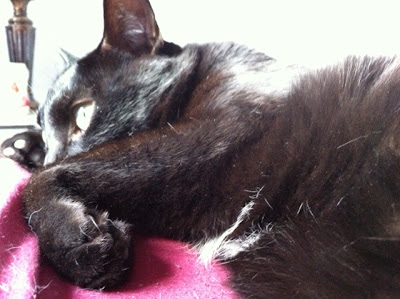 Nothing.  Well, at least at first.

Once Mitchell figured out that he was free to roam, he sauntered out into the hallway, and stopped cold when he saw Annie.  He made a glad little sound and ran over to her and began grooming the top of her head.  I think that Annie stared at him in stunned shock and silence for about three seconds before she made the "Annie war-cry" and slapped him down.  And then it was Mitchell's turn to stare at her in stunned shock and silence.  (Patches had LOVED being groomed.)

Hmm.  That could have gone better.

But he didn't let that put him off.  Romeo would have turned and run and remained hostile for days.  Mitchell kept trying to make friends.  I could see Annie started to soften towards him, especially since he'd always try to groom the top of her head, an impossible spot to reach herself.

He then tried to approach Charlotte, who predictably made a gargling sound like she'd been possessed by demons.  We split them up really quickly afterwards - Charlotte still hasn't 100% accepted Annie, who she has lived with for two years, so we have no reason to think that she's ever going to be friendly to another cat.  At least Charlotte is willing to "live and let live," as long as she isn't disturbed or annoyed too much.

But Mitchell didn't give up on her either.  He periodically tries to approach her, being as gentle and unassuming as he can be.  Most of the time she drives him away.  But...  I caught them touching noses earlier this evening.  All was well until I saw Charlotte's ears flick back, noticing me entering the room. Then of course she had to save face and snarl at him.  Mustn't let me think that she was weakening.

Bit remains our "hard case," which I expected.  She was Romeo's primary tormentor, following him, stalking him, attacking him from nowhere and making him a nervous wreck.  She was the main reason that we kept him isolated from the other cats... Bit just did NOT know when to quit, and poor Romeo had no knowledge of how to get her to leave him alone.

I was worried about the Bit-Mitchell encounter the most.  After all, if she drove him to the point of a nervous break-down, or made him dislike other cats, the shelter would not be happy with me!  (And I'd feel horrible.)

When she saw him, she started doing the same thing that she'd always do to Romeo, which is to say that she laid her ears back and started slinking towards him, in that predator-tracking sort of way.  She fully expected him to run away and hide. What she did NOT anticipate was for him to chirp at her and bounce happily towards her expecting to play.

Well, this didn't go over very well, to say the least.  Bit seems to be very worried about him, but I think that maybe she's even relaxing somewhat.  We're trying to feed her "gooshy food" in his presence which does seem to be helping.

And...  we're already leaving all of the cats alone together.  Mitchell and Annie hang out together the most, usually on our bed, and I walked in on a mutual grooming session the other evening.  I think that Annie really, really likes him, possibly because he's the only cat in the house that will defer to her.  She's also been the one that has spent the most time with him... the first several days, there was no way we were leaving all of the cats alone together.  But we didn't want to leave Mitchell completely alone because he so clearly didn't like it.  So we'd put Annie, the one who'd reacted the best to him, in with him.  So they've gotten some bonding time.

Anyway, things are moving along much, much better than I thought they would.  I feel like a United Nations peace broker, but I do think that we're through the worst of it and are working towards a smooth integration.  (After which, of course, Mitchell will likely get adopted into his Forever Home, but we'll cross that bridge when we get to it.)


Posted by House of Carnivores at 6:18 PM