In August 2008, we did one of the most terrifying things in our lives:  we closed on our first house.  We spent the rest of August and half of September doing some minor renovations to it before moving in...  fresh coats of paint in several of the rooms, ripping down the inexplicably hot pink trim from the master bedroom, etc.  We moved in over the weekend over September 20th.  My mother flew out to stay with us that week so that she could help us unpack and start making our house a home.  Some of you may have heard at least part of my description of move-in week, which is when we got the "girls," but others haven't, so I'll retell the story on the anniversary of the great event.

On September 21, which was a Monday, Jeff had to go out and do an errand.  My mother and I were standing in the dining room, which was the "staging area" for all of our boxes, which is to say that we were surrounded by stacks of boxes nearly up to our heads.  Jeff came in to say good-bye and told me that when he got back, we should go to the animal shelter and each pick out a cat.  (He wanted a kitten, I wanted an adult, so we already knew we'd be getting two.)

I had a sensible reaction to this, and told him in no uncertain terms that we were not introducing cats into the house when we were still living amongst and out of the boxes and while my mom was sleeping in the guest room.  He left to do his errand, and by the time that he'd returned, I'd completely changed my mind. I'd found the website for the Animal Rescue League, just a short drive from the new house.  And on that website, I'd found a profile for a certain little cat named Annie.  I've always been drawn to the cats that I felt like no one else wanted.  This was partially why I wanted an adult.  Annie was black as well, which brought down her adoptability for whatever reason.  She'd just returned to the shelter from a foster home, which she had been in to give her a much-needed cage break.

So, Jeff, my mom and I drove to the Animal Rescue League.  The numbers of cats in cages was overwhelming to me.  They hadn't yet built their cat center, so there were no colony rooms, and cages lined the hall.  I saw Annie, but she was in the back of her cage, probably hiding from the chaos (there were a lot of people looking for a pet cat that weekend.)  I meant to go back and meet her, but Charlotte got my attention.  I KNOW many of you have heard her story, so I won't go into details there, but she chose me without a doubt, and I knew that I needed to take this tuxedo kitty home with me. 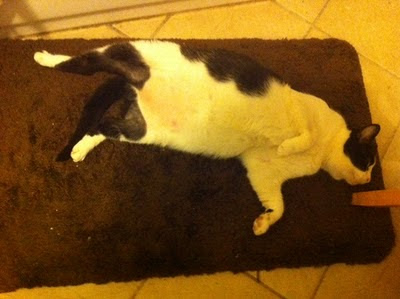 So she was my choice.

Meanwhile, Jeff had looked into the cages of several of the cats, but was instantly intrigued by one containing a little gray fluffy kitten.  She didn't even have a name on her cage yet, though later her paperwork named her as "Fluffy."  One of the shelter workers mentioned to him that she was a polydactyl, which intrigued him, and he asked to have her brought to one of their rooms that they have designated for potential adopters/adoptees meetings.   Fluffy, soon to become Bit, startled when some dogs started barking, and leapt onto Jeff's arm and ran up to sit on his shoulder to get away from the noise.  He fell in love immediately, and I knew that she was to be ours. 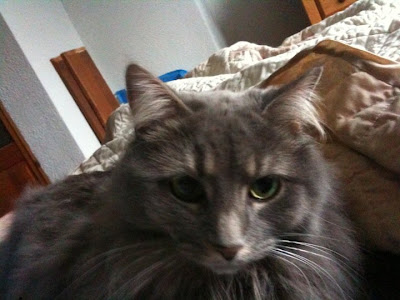 We went home with Charlotte (who was always named Charlotte, by the way.  She came with that name and it just seemed to suit her so well that I never even dreamed of changing it) and Bit, whose real name is Q-Bit, by the way, short for Quantum Bit.

And all was well.  Except that I couldn't get a certain black kitty out of my mind.  I looked back on the Animal Rescue League's website to see if she'd been adopted, hoping that she had been and that I could quit fretting.  No one adopted her.  I checked back on Tuesday, then on Wednesday, then on Thursday.  Annie was still there.  I started re-reading her history.  Found stray, brought in, kept in the shelter for several months.  Went into a foster home for a few weeks, then brought back.  She'd been in the custody of the Animal Rescue League for a little over a year.  No one was going to come in and take her away, I realized, even if I checked back daily.  (Okay, eventually someone would have.)  But black cats get adopted slowly, and shy ones that don't really like to be petted all that much even moreso.

I was at work.  So I emailed Jeff, wondering how I was going to sell him on going back to get her.  We emailed back and forth a few times.  I called him.  He called me back.  We decided that we could handle three cats.  At the time, it seemed like a huge decision.  I have to laugh at how seriously we took it, given that now the idea of having just three cats makes it seem like I'm getting off easy!  I got home from work as soon as I could, and we took off back to the shelter, squealing into the parking lot half an hour before they closed.

If the volunteers and staff there thought it odd that we burst through the doors, flustered and out of breath,  wanting to meet Annie, they didn't say anything to us about it.  They brought her back to a meeting room, and she was thrilled to play with feather toys with us for awhile.  I could tell that she was not a snuggly cat, but something in her eyes, maybe a quiet desperation, made me feel really protective of her.  And in ten minutes we had her in one of their cardboard carriers and were taking her home. 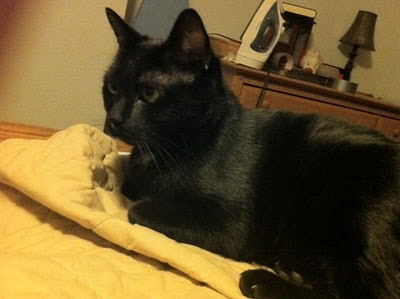 So even though technically Annie's Gotcha Day isn't for another couple of days, we're going to celebrate everyone's day all together.  The "girls" have been a constant source of joy in our lives.  Bit the Troublemaker.  Charlotte the Diva-Queen.  Annie the Rogue.  They're some of my favorite people on the planet, and I would do anything for them.

And they know it.

Posted by House of Carnivores at 6:31 PM