A Party With Greyhounds

Once a year, Steel City Greyhounds has a big greyhound birthday party, to celebrate all of the greyhounds that have been adopted through the adoption program.  It is held at the Lucky Paws Pet Resort, in Freedom, PA.  Some of you may remember my post from last year, when we took Argos.

The greyhounds all have so much fun at these outings... we went to this year's birthday party today, and there were about 40 dogs there!  They are able to run free in a large, fenced in area, and they happily charged around the enclosure, chasing and being chased, and generally having a great time.  And then of course if they need to cool down, they can race into the enormous dogs-only swimming pool! 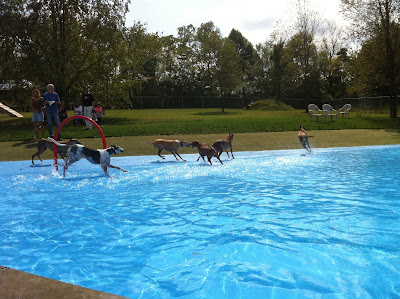 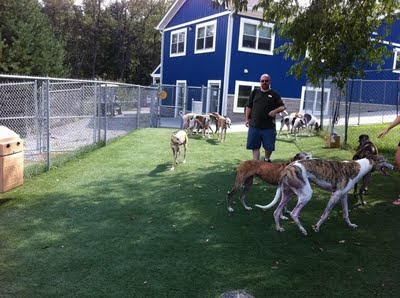 At one point, the resort employees brought around baskets full of cups of vanilla icecream for all of the dogs!  I got Maera a cup of icecream.  I didn't realize that my husband also got her a cup of icecream, and she wound up polishing off at least one other cup that another dog didn't care to finish.

Argos doesn't like icecream, so at least one of the hounds doesn't have a belly ache tonight!
Unfortunately, we'd only been there for about 10 minutes, when Argos ran through the pool at top speed, but lost his footing.  He hit the ground hard, and when he came back up out of the water, everyone, and I mean everyone, could see that his entire back leg was covered in blood.  Eeek!

We of course raced up to grab him (by the way, he did NOT make the "Greyhound Scream of Death" which should have been my first clue that the wound was a lot more minor than it looked.)  We figured out pretty quickly that was just that he'd scraped his leg on the cement, so it wasn't a deep wound at all.  He got to wear the spiffy red bandage that you see below for the rest of the outing. 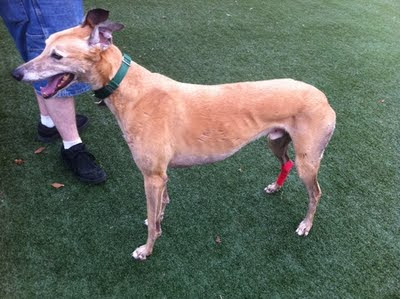 The scrape didn't encumber him at all, and he was promptly back to running around with his pack of buddies like nothing had happened.  I would try to get him to come over to me to at least make sure the bleeding had stopped, but suddenly, he ceased to know who I was, haha, and completely ignored me.  Ran AWAY from me even, when I tried to approach.  (I suddenly feel some empathy for the parents of teenagers.)

I just let him go, figuring that he'd slow down if it started to truly bother him.  And it was fine.  Except.  Every once in awhile, I'd see him start to limp.  It was always when there was a woman, any woman (except me) nearby.  He'd limp up sadly to her, and lean against her legs.  She would make sympathetic noises and pay lots of attention to him, and oftentimes give him a treat.  He would soak up as much sympathy and food as he could get, then would be off running with his buds again.  You know, until he saw another "mark."  Help me.  I have a con-artist living under my roof.

Maera did well too, though she didn't go for as much running around and playing with the other dogs as Argos did.  She did a little bit, and was willing to wade into the water about ankle deep, but for the most part, she attached herself to my hip or Jeff's hip, and didn't let either one of us out of her sight.  (Well, until random strangers started offering her icecream.  Then her loyalties wavered a little bit.)  I was actually very pleased with how she handled everything, because I've started to notice on our walks, that she is oftentimes  fearful of other people, and sometimes of other dogs.  She definitely soaked up a good experience today, and I expect that it will help us to build her confidence.

Both dogs are passed out into little heaps on their beds tonight.  These events are a lot of fun, for the pups, who get to exercise and socialize, and for us humans too, because we can talk with other greyhound folks.  But one of my favorite side-effects is how placid everyone is afterwards!


Posted by House of Carnivores at 6:10 PM