Goo (he raced under the name Yellow Goo) is a very large, muscular white hound, and has a VERY striking appearance! It became apparent that he, like many large dogs, is very patient, gentle, and laid-back... a gentle giant.   He was also great on the leash - he didn't pull at all, and didn't startle at noises or movement.

He seemed a little uncertain of us at first, but did start to warm up by the time we got finished with his walk and photo session.  In fact, by the end of our time together, he was leaning against my husband, and thoroughly enjoyed having his neck scritched. 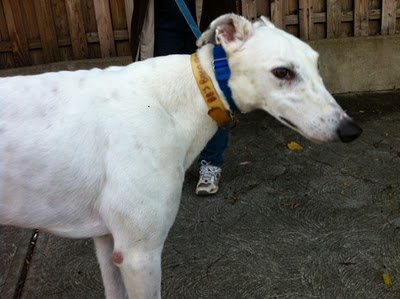 You'll see in the photo above that he has enormous brown soulful eyes, which he did use to his advantage to make me stop what I was doing to pet him.

My impression of Goo is that he is a snuggler, and if you want a hound who will curl up with you on the couch to watch t.v. at night - he would be an awesome choice!


And just because it seems that we are never going to have a "photo session" in which one of the dogs doesn't come right for the camera in mid-shot, here is a photo of Goo, doing just that.  He had been watching my husband curiously throughout the time that he was taking pictures, and finally couldn't resist any longer... he HAD to know what the little clicky box was.

Goo was born in July 2006.  He was a very good AA racer, but broke his leg, ending his racing career.  As you can see, he's feeling much better now!
Posted by House of Carnivores at 6:59 PM