I've blogged about a lot of topics lately, but I haven't made one of my good "old-fashioned" posts just about how my animals are doing.  So here goes...

Argos is doing well - but he is ALWAYS doing well.  He really is one of the most trouble-free animals that I could have ever asked to have.  He never shows any inclination to chase the cats (thank God!)  he loves going for walks, is okay with being home by himself while we're at work, is polite and well-mannered in public...  good stuff!  He is turning into a ridiculous beggar, though.  OMG, that dog is food-motivated!   He was extremely picky about what he ate when we first got him - we could get him to eat meat and rice, with a little plain yogurt mixed in, then he turned his nose up at the yogurt.  We had to beg him to eat his kibble most meals.  He just wasn't that into it.  He wasn't even interested in most "people food," though he never turned down a piece of meat.  Now...  he loves people food, and will happily hoover down anything that I drop on the kitchen floor while cooking.  Spaghetti, cheese, and most recently, french fries.  He'll also hoover down his kibble like he's breathing it in.  What we used to have to beg him to eat now gets gobbled up in less than 5 minutes.  It's astounding, truly.

Charlotte is fine too.  She's still doing really well on her medications, and rules the house with an iron paw.  Seriously, the other cats are terrified of her, and it's very obvious to everyone but Romeo that she is dominant in this house.  More on that in a bit.

Annie has discovered a little kitty-bed that I bought for them this past summer, that no one was using.  (I think it was because it was too hot outside.)  But now it seems like every time I turn around, she's on the bed.  It warms my heart when they actually like the stuff that I buy for them.  Silly, isn't it?  The picture below is of her and Bit on the bed.


Bit.  Bit is being a little nightmare, STILL.  She is obsessed with Romeo the way that a stalker is obsessed with his hapless victim.  She pesters him constantly, and has him very jumpy.  I'm concerned about him.  We've escalated it now... if Bit starts harassing Romeo, she gets picked up and dumped into the bathroom, which she HATES.  Don't worry, we're not mean about it, or inhumane.  She is in there with a litter box and at least a bowl of water.  She's never in there for long enough that she misses a meal.  We're hoping that it starts to sink into her head that when she's mean to Romeo, she goes into the bathroom.
Romeo.  Romeo is currently napping between my feet at the foot of the bed.  He's in here with us by himself tonight, because we know that Bit will just antagonize him the whole time and we won't be able to intervene because we're, well, sleeping.  I thought that they were getting better, but they're not.  Bit had him so agitated this week that he pooped in the window sill rather than to jump down and try to get to the litter box.  And I can't blame him, because it would have gotten him ambushed if he'd tried.  I feel bad for him - he'll hiss and growl and make a good show of defending himself, but doesn't really stick with it long enough to really deter her.  We do what we can for him, though.  If we're gone, he gets to hang out in our bedroom by himself, with his own food and water, and his own litter box.  If we're home, we make him "mingle" with the others at least a little bit, because they do have to eventually learn to get along.

And now Charlotte has gone after him a few times... she was previously content to just glare at him from across the room, but now she's gotten more stroppy about it.  I think she's trying to assert her dominance, and when Romeo doesn't immediately roll over for her, it annoys her.

I don't know.  Cat people?  Do you have any other tips or advice for me?  I would love to be able to wave my magic wand and have the felines in my house less willing to beat each other senseless, but have the feeling that we're in for a long battle.

Here's Romeo, on his new favorite perch, the dresser.  That is normally forbidden to the cats, but we've been letting him do it because it gives him the high ground.  This is the only thing that keeps Bit from trying to stalk him. 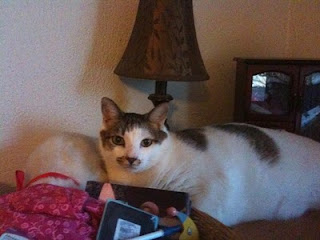 It's not all gloom on the Romeo front - he's getting more affectionate with us, and seems to trust us a little more.  At least, I'm choosing to interpret his lack of desire to claw, bite, or hiss at me as a positive sign!  He loves getting petted now, and even purrs when I give him a light hug.  So I think he likes us humans just fine, but probably wishes that Bit and her sisters would go jump in a lake.  (And when I say that he did used to claw and bite at us pretty often, it was almost always as a warning.  He was never trying to hurt or draw blood.  The only time he drew blood was an accident, when he went to jump off the bed, and hooked the cuticle of my toe with his claw.  Ouch.)
Posted by House of Carnivores at 7:49 PM