Brrr!  It's cold around here this week!  Well, it's been down in the 40's, and while that is nothing compared to what it will be like later this year and early next year, it is still a shock to the system.  Especially after we were spoiled with three months of very warm, sunshiney weather.  I've even broken my long-standing rule of never turning the heat on before November.  I'm blaming it on the animals.  They're cold, therefore the heat comes on.  It has nothing to do with me shivering under the blanket, no sir.

It started to get cool on Sunday, only we were caught unawares.  We went to North Park for an event called Hearts and Hounds, hosted by UPMC, a large local health system.  It was to promote good exercise and good health, by walking your dog!  Walkers and their dogs were invited to join for a donation fee, all proceeds to go to the American Heart Association.  We were asked to go as representatives of Steel City Greyhounds, and to set up a booth for the group in case anyone there was interested in adopting a greyhound or wanted information about it.

It was a lot of fun!  There were dogs of all shapes and sizes there; everything from Westies to a gorgeous Newfoundland.  There were even two other greyhounds, which pleased Argos immensely.

But as I said, the cold caught us a little by surprise.  Jeff had a hoodie, and I was wearing a thick fleece pull-over, so we were fine (though still a little chilled.)  But then about half an hour after we got set up, I noticed that Argos had started shivering.  Yikes!  It was going to be a long morning with him being so cold, and I was trying to figure out what to do about it when Jeff stepped in and saved the day. 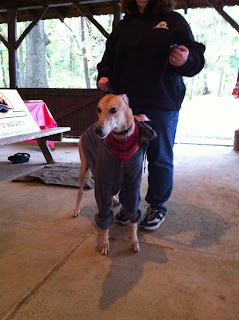 Why yes, that is a hoodie that Argos is wearing.  Jeff stood there in his short sleeved shirt the rest of the morning so that 'gos could stay warm.  What a guy!  I think that some people were startled by his devotion, but some (including me) were impressed.  Argos got quite a bit of attention in his new get-up.

I do think he was happy to get back out of the hoodie, but he kept that red bandana (given to us by the event hosts) and seemed terribly pleased by it.   He strutted around, showing it off for the rest of the day!

So, I'm not sure of what to do about keeping Argos warm.  I have a winter coat for him, that I purchased for him last year.  It's really heavy, though, and is a little bit of overkill for anything besides truly wintry weather.  And I remember that when we got him last January, he didn't have a winter coat, and it didn't really seem to bother him that much unless it dipped into the twenties.  So does this mean that he'll get used to the cooler weather?  Should I get him a light jacket?

Here's a secret...  well, not much of a secret, but it IS the first time I've admitted it online... I'm attempting to knit him a sweater.  I imagine that it would be PERFECT for weather like this, but at the rate I'm going, he might get to wear it in the spring.  (It's a beautiful sweater, or at least the picture on the pattern is.  It's a ribbed turtleneck, and looks oh-so-elegant on the long greyhound neck.)

But anyway, I think I want to try to get him a light jacket in the interim.  It's not the pup's fault that his mom is such a slow knitter.

The cold has another side-effect that I had completely forgotten about in the summer heat...  the animals get much more affectionate!  They are constantly seeking us out to be a source of warmth for them, which means lots of snuggle time!  I can't prop myself up on the couch this week without Argos climbing onto my lap and sandwiching himself between my legs and the back of the couch.  He'll stay there absolutely as long as I do, never showing ANY interest in jumping down.

We haven't spent a night in the bed without at least one of the cats joining us, usually Bit.  I've awakened most nights this week to have her curled up in a tight little ball up against my stomach.  I've seen her do something similar with Jeff.

While I'm sorry that everyone is cold, I do have to admit, I am enjoying the snuggle time.
Posted by House of Carnivores at 6:09 PM