We are indeed recovering from our rather "interesting" week, in which four of our five animals went to the vet for routine care, one went back for treatment for a ripped dewclaw, I was sick with a cold, and work was insane for both me and for Jeff.

Most importantly, of course, is that Argos is doing just fine.  I knew that he was first thing this morning - he heard Jeff get out of bed, and he flung his head up to see what was going on.  Curiousity, always a good sign! And when I drug myself out of bed, he was immediately on the floor and running around us with his tail wagging. And he tucked right in to his breakfast, even allowing us to trick him into taking an antibiotic!  (I still marvel at that, mostly because most of my pill-giving experience involves cats, which is a completely different scenario.)

He has to wear his cute little teal bandage for 72 hours, to give the wound time to heal over without him fussing with it.  Here's a picture of him, curled up in my lap as I'm stretching out on the couch this evening for some much-needed R&R.  You can see his wrapped paw. 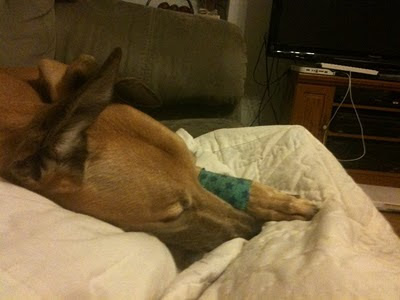 He always starts out curled up at the far end of the couch from me.  Then he crawls a little closer, which is what you see above. But if I heaven forbid have to get up to go to the bathroom or do something elsewhere in the house and then try to come back to claim my spot again, THIS is what happens... 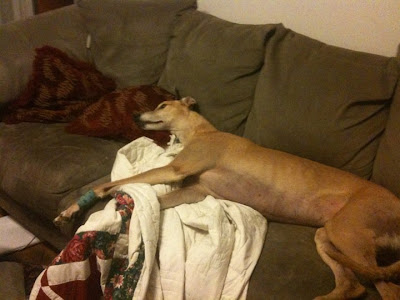 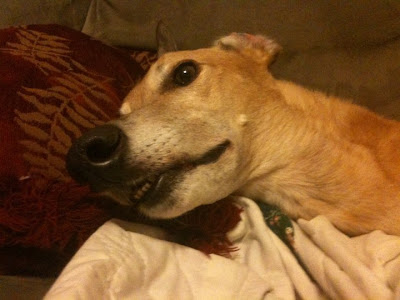 The above is his relaxing face.  So I just let him stretch out on the couch and I just perched on one end.  He isn't spoiled at all, right?
Posted by House of Carnivores at 7:59 PM