Update:  Chance has been adopted!

I had the privilege this morning of walking two of the dogs that Steel City Greyhounds has up for adoption!  Their names are Chance and Lady, and they are both fantastic dogs.  My husband and I brought out own greyhound, Argos, with us mostly because it would be too sad to leave him moping on the couch while we went out and have fun with other dogs, but also to see how the "adoptables" would react to having another dog around.

We actually met both of these dogs last weekend as well, when we volunteered at a Petco Meet & Greet.  I followed up with this walk to get to know both of them better, and to snap lots of photos of both of them.

Why?  Because I want to tell you about both of them.  If you read this post, and think either one sounds like a good fit for your home, please contact Steel City Greyhounds! 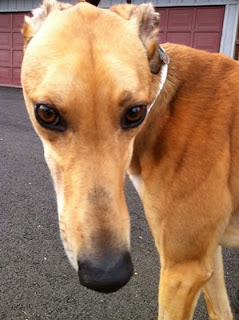 This is Chance.  He is only two and a half years old.  He is brimming with youthful curiosity (he wanted to sniff everything!) and would love to live with a person who would introduce him to the wonderful world of parks, walks, toys, and most importantly... treats!

He is very gentle with people.  In fact, my first impression of him was as I was leaning over him, checking to make sure that his leash was firmly attached... he looked up at me, craned his neck, and gave me the softest, gentlest kiss on the nose.

As an added bonus, Chance loves other dogs as well.  He was very impressed with our dog Argos, and set out to imitate him in every way!  He was also noticeably attached to his kennel mate Lady, and kept nuzzling her, and keeping an eye on her so that she didn't get too far away from him.  I do think that he would bond very quickly to another dog, if there was one in a household that adopted him.

Chance is highly food-motivated.  If you offer him treats, he promises to love you forever!  (Well, I think that he would do that anyway, but they can only help.)  He is instantly alert to the presence of food, and has a particular fondness for people-food.  (I wanted to kick myself for forgetting to bring treats along for the walk this morning, but do remember last weekend, watching as he happily gobbled McDonald's french fries offered to him by someone in the Petco store - along with dog biscuits, dog treats, and one attempt to eat jellybeans.)

Chance has been with Steel City Greyhounds for about a month now.  He's being very patient, but thinks that it's high time that he got a home of his own, and someone to love him. 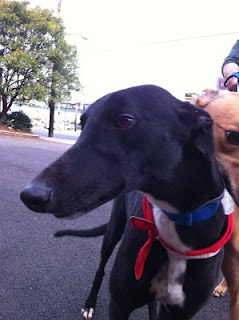 And here is Lady, who is in addition to being energetic, is  sweet and cuddly and spent most of the walk trying to convince one of us to pet her or scratch her behind the ears, or even to give her hugs.
This smart girl seemed like she remembered me from the Petco last weekend, and must have been pleased to see me again, because her tail immediately started wagging.  She was very motivated to stay close to my side the entire time that we were walking, and was very in tune with my mood - if I laughed, she would look up at me and wag her tail, if I stopped to look at something or say something to my husband, she would give me a questioning glance.  But nearly always, her gaze was on me.  She is so ready to bond with a human companion who will love her!
She seemed perfectly happy to interact with both Chance and Argos, so would react well to other dogs, but she really preferred to get attention, hugs, and pets from me and my husband.
Lady is very young  - only three years old!
She also was very intent on getting into our car for some reason.  I'm guessing that her adopter will have no troubles getting her to go places!
I am posting a few other candid shots that we took of both of them.  I apologize for all of the shots that contain bits and pieces of my husband, the other dogs, or me:  we are newbies when it comes to walking multiple dogs, and it was difficult to get good individual shots of them! 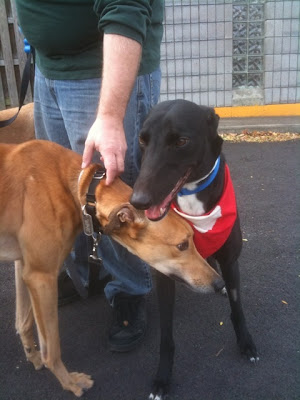 It makes me sadder than you can imagine that I can't adopt both of these sweethearts, but if I can't, then someone else will be able to enjoy them!  Will that someone else be you?
Posted by House of Carnivores at 4:14 PM