We've made some progress on the Romeo front!  Well, that is to say that Romeo himself has made some great progress in getting more comfortable in our home.  I think that he is starting to feel better - now that his stomach issues and his bladder infection have cleared up, he's more curious about his surroundings, and doesn't just sit in the window or on our bed all day long - he wants to explore.

In just the past two days, he's jumped up on the dresser to look around up there.  (Granted, he promptly got yelled at, and told to get himself back DOWN, but even if it was technically misbehavior, I'll take that over a lethargic, unhappy cat.)  He's also stumped across the floor and checked out Argos, once he realized that Argos was in his crate and therefore couldn't eat him, tried to use the scratching post, explored the closet, AND today he went downstairs of his own volition.  And then when we got back home this evening, he was in the living room, sacked out in the papisan chair that we have back in one corner.

Sorry for the lack of focus in the picture above; I was trying to snap it quickly because I could tell he was nervous when Jeff, Argos and I burst through the front door and we all (the humans anyway) started making a fuss over him and snapping pictures.  I realize that a cat napping in the papisan chair is not newsworthy normally, but this is HUGE for him.  Usually when he's in the living room, he's back in the corner so that no one can sneak up on him, and he will NOT come out.

He and Bit are still at odds; she still stalks him quite a lot... but I think it's getting better.  He's actually gotten her to back down a few times by hissing at her.  In fact, I'm watching them even now, and Bit has backed off and is sulking, watching him from a distance.

Annie and Charlotte still don't get along with Romeo very well either, however we can trust both of them to more or less leave him alone.  Charlotte is going to growl and hiss at him if he gets too close to her, but she isn't going to go out of her way to make his life miserable.  Annie always looks vaguely confused and hurt when he hisses at her; she really doesn't have much aggression at all!

And of course, he's never had much issue with Argos.

Speaking of Argos, he's still enjoying the yard, though we're having some difficulty making him relax out there.  We've finally decided that he's nervous; it's something new, and I think for some reason he's worried that we're going to leave him outside by himself.

Here's some pictures of him grazing on what little grass I managed to root this summer...  does he not look like some kind of forest deer? 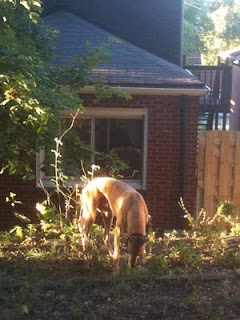 Posted by House of Carnivores at 8:19 PM