I have a Bit Back!

I have a Bit back!  Well, I think that we've been getting her back for a couple of weeks now, slowly but surely.  But we got good solid evidence of it the other night.

You see, after we got Romeo, Bit became 100% obsessed with him.  She would leave him alone for long enough to eat, drink, and use the litter box, but little else.  She even stopped grooming herself, and didn't ask for Petromalt, something that she normally LOVES.  Every other spare moment (when she wasn't shut out of the room he was in) was spent watching him, spying on him, stalking him, chasing him, and otherwise driving the poor boy to nearly have a nervous breakdown on us.

But something has been happening... Romeo has started to fight back.  Just a little, and not with consistency, but enough to make Bit think twice about approaching him.  I think Romeo was probably not used to being in a house with other cats, and didn't know HOW to deal with others of his kind, particularly one who was a stalker.  But he's learning.

Which means that Bit is starting to lose interest in him.  (Thank God!)   Oh, she still feels the need to pick on him a little bit, but she approaches with more caution, and will actually leave the boy in peace for longer periods of time.  (He is happily sunning himself on the window kitty shelf now, in a Bit-free environment, as she and Annie chase each other through the other rooms.)

But the other night, Bit did something that she hasn't done since we got Romeo.. she jumped up on the bed with us and stayed there all night.  This meant that I didn't get much sleep at all, as Bit firmly believes that she can sleep all day, but at night, it's time to wake mommy up for some petting and cuddle time.  And I let her do it, because I'd missed it.  She ran up and down the length of my body several times, curled up on the pillow next to my head, and would kiss my nose every time I started to drift off to sleep.  When I'd open my eyes to look at her, she'd start to purr. 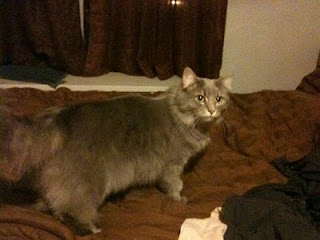 It's so good to have you back, Bit.  Now if we could only get Jeff to be a lighter sleeper, she might pester him a little more and let me get some sleep!

Posted by House of Carnivores at 8:34 AM