Staying Cool (or not)

Wow, the weather is really hot this week... it's in the 90's and super humid.  (I know that there are people in places that get much hotter - but for Western Pennsylvania, this is as bad as it gets!)

We have a 100 year old house that never got a forced air system, which means... no central air-conditioning!  We have a really nice air-conditioner unit in the bedroom, and a smaller, less potent one for the computer room, but the rest of the house is HOT, even with windows open, ceiling fans, and box fans in just about every room.

Argos has figured out that there are "cool rooms" and tries his best to hang out in there.  He'll reluctantly go downstairs if we do, but he casts longing glances back at the staircase the entire time that we're down there.

The cats either aren't that bright, or else they truly don't mind the heat - it's like they seek out the hottest rooms of the house, and then dramatically drape themselves over furniture and just look like they're hot and miserable.  I try to carry them to one of the air-conditioned rooms, but they rarely stay.  Little goobers.  So I've put bowls of water throughout the house to make sure that everybody stays hydrated.

Tonight Argos was outside with me while I was watering the flower beds, so I turned the hose on him and soaked him down.  Normally, he protests something like this, but tonight he just stood there for it, looking vaguely pleased.  Once we got inside, he didn't even try to shake off!

Now we're up in the computer room, with the so-so air-conditioning, and getting ready to move into the bedroom, which is nice and cool and wonderful to sleep in.

Anyway, there isn't much going on that's blog-worthy this week, at least so far.  The cats still don't like each other (surprise surprise) but there's fewer outbreaks of actual warfare, and more sitting around and glaring at one another, cold-war style.  I guess that it's a step in the right direction, though of course I would much rather that everyone was getting along and having a great time together.  Is this a pipe dream?  (It very well may be, I realize that.)   So I'll settle for... everyone being in the same room without growling.  Let's try that for a nice, easily achievable goal and then work from there.

Oh, and here's a picture of Romeo, saying "Give me some sugar, baby." 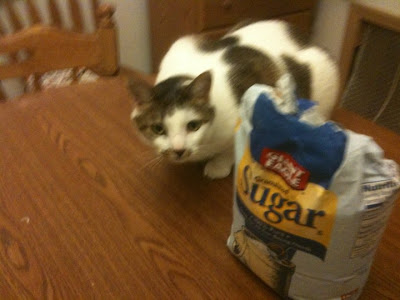 Posted by House of Carnivores at 7:23 PM