Well, that's what it seemed like, anyway.  The next door neighbor invited us over into their backyard so that I could take the leash off and let him run a little bit.

In the interest of full disclosure, I have NEVER taken Argos off of the leash since we got him (he runs free in the house, of course, but isn't able to get up much speed inside.)  There's a couple of dog parks in the area, but any time that I can get him there, there are a lot of other dogs, and I haven't felt comfortable just turning him loose into a playground full of everything from Rotties to teacup poodles.  Don't get me wrong, he gets exercise; we take him for two fairly lengthy walks a day, in addition to his regular potty breaks.  It's just all on-leash, and at the pace that I can walk.

It took him awhile to realize that he was ALLOWED to run... the neighbors' Golden Doodle, named Cooper, was doing his BEST to get Argos to run and play with him, but Argos was having none of it.  I finally had to run out into the middle of the yard.  As soon as he saw me doing it, he started chasing me, and then just ran laps around the yard as fast as he could go for several minutes.

I cannot describe how awe inspiring it is to see him do that...  I've seen greys run before, of course, but I guess since they weren't the dog that I'm head over heels with, it didn't have the same impact.

Luckily, we're getting a fence soon.  Last time I posted I mentioned that we were getting an estimate on a fence...  the estimate came in, and it is within our budget, so, yay!  We'll be getting one.  A couple of things have to happen first.  Next week, we're supposed to have a residential land surveyor come out and peg off our property lines so that we know for sure that we're fencing OUR land and not someone else's. And we have to have a tree cut down...  it's growing diagonally, and is going to interfere with the new fence.  I've been hesitant to cut it down because it's a cherry tree, but then I discovered that it is infested with carpenter ants.  So I got a quote on that today.

So, even with the tree calculated in, we're within budget.  This makes me happy!

Though the way that Argos was running around the neighbors' yard, I realize that he is going to be leaping off of our retaining wall whenever he possibly can...  I'm not sure that I like that idea because I don't want him to get hurt.  So I may plant a row of shrubs over the retaining wall, in hopes that they'll deter him.

I didn't even think to get pictures of him while he was running...  I was too caught up in the moment, I suppose (and a little worried that he and Cooper might fight).  So here's a picture of him afterwards, when I've brought him back inside.  Doesn't he look happy? 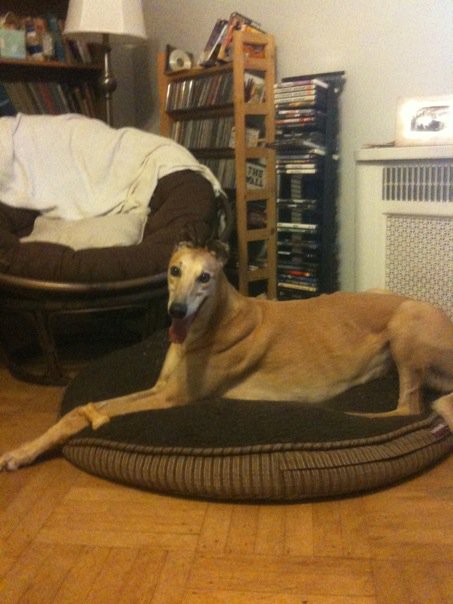 And of course, he was famished after the three minutes of running, so he had to have an evening snack... 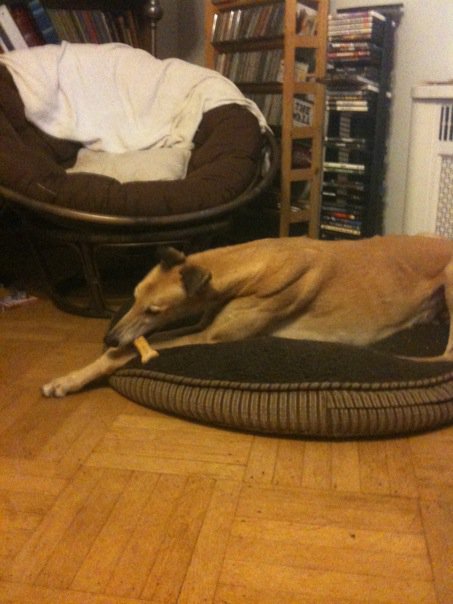 Posted by House of Carnivores at 5:26 PM