Fences and Fireworks and Naps Oh My

Tomorrow night, we have someone coming to our house to give us a quote on installing a fence in our backyard.  I am very excited about this!  Not so excited about the amount of money that we are going to have to spend to do it, but I guess that's just part of it.

Argos is looking forward to having the fence too!  That will mean that he can run and frolic in the yard without having to have his leash on all of the time. 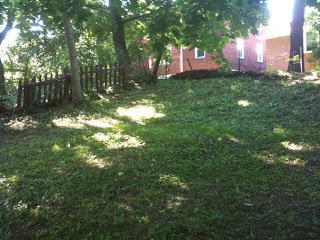 Here is a shot of part of our backyard.  You'll see part of the neighbor's fence in the background, but it isn't tall enough to contain a determined greyhound.  At least, one who DOES jump, no matter that they tell you that they don't tend to be jumpers.  I have no desire to see my dog racing down Murray Avenue, a busy street not far from our house, so a TALL fence it is. 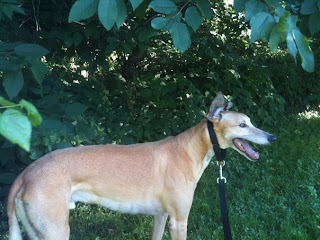 I look forward to being able to see him play in his own backyard.  I think we'll get him a wading pool too - I think that he would like that, especially during this hot summer!

The cats are less impressed about the fence, though have no doubt about it, they will be fascinated by all of the activity in the yard when there is finally a crew there to put it in - they will be perched on window ledges all over the backside of the house, staring at the crew all day long.  Hah.  That isn't creepy or anything, no.

Other than that, we have had a very lazy weekend.  (Well, I slipped outside for a couple of hours early Saturday morning to finish mulching my hillside, but came back in when it started to get too hot.)

Here is Romeo, napping.  You'll notice that he has completely rejected the "kitty papisan" that I bought for him. 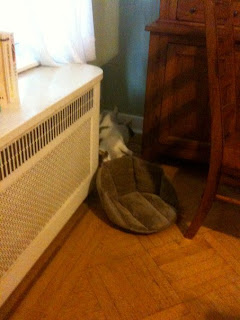 And here is Charlotte, napping.  (I told you that it was a lazy Saturday!) 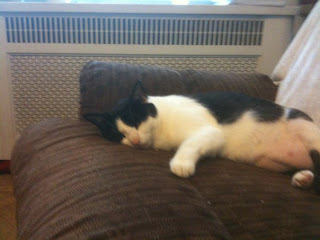 And here are some pictures of Annie and Bit proving to Argos that they are not scared of him.  (And him being an absolute doll about it.) 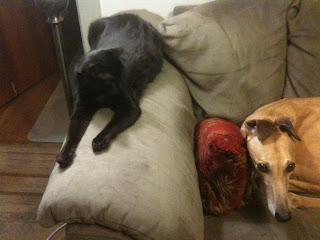 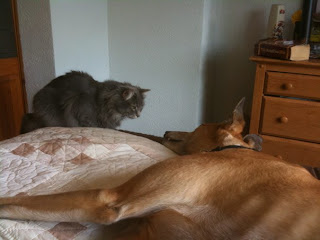 Oh, and one more flattering picture of Romeo. 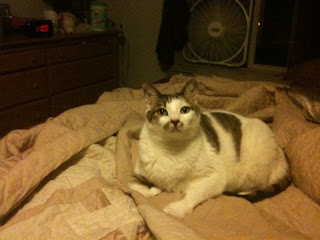 The Bit versus Romeo wars actually got more intense yesterday, which completely baffled me... I'd thought that they were starting to settle down.  But then I realized what was happening - Bit was being the aggressor, as usual, but Romeo was actually starting to fight back, which was different.  He must be starting to feel a little more at home.  Maybe it made him realize that he was being pushed around by an 8 pound cat that is a little more than five years his junior!

(Incidentally, he is NOT 16 pounds, like we were told when we adopted him.  We took him for his initial vet check-up, and were told that he is actually 18.9 pounds.)
Posted by House of Carnivores at 7:40 AM