Status of the House

I thought that today might be a good time to recap how life is going in the House of Carnivores... some of you may remember that things went all topsy turvey back over Memorial Day weekend when we introduced a new cat to the mix.

The Cat Wars:  Are unfortunately, still going on strong.  Though like my last cat update, it's cooled to the point that there are long stretches of "cold war" where everyone is sitting around glaring at one another.  The biggest thing that we have to worry about is one of them (probably Romeo) parking his sweet self next to the food and water dishes and growling at any of the others if they get anywhere near him.  We've had to set up a secondary food and water "station" so that no one goes hungry, or especially thirsty.  This, I hope, is a temporary measure.

Romeo and Bit are still the two that are most at each other's throats.  They wake us up at least once a night with a screaming fight.  I've read all of the cat literature, and know that this too shall pass, but I could cheerfully toss one or both of them out the window some days!  Why could we not have more sociable cats?  We just happen to be "lucky" enough to have some very strong personalities in our house.  Unfortunately that  means that no one wants to back down and be the low-cat-on-the-totem-pole.

Other Romeo News:  When Romeo is not engaged in warfare with Bit, he is a very affectionate cat, who loves humans.  He has slept in on our bed most nights this week, much to the consternation of the others.  Here's a true story:  I got up in the middle of the night to go to the restroom.  When I came back to bed a minute later, he'd already oozed, cat-style, over my place in the bed.  I sighed, and resigned myself to having to curl up around him, which is certainly what the others would have made me do!  But he made a little meow of greeting, and then scooted over closer to my husband, giving me about six more inches of space.  What a gentleman!

Charlotte:  Every once in awhile, I like to make a Charlotte update, and I'm happy to say that she is fine, and that her heart condition doesn't seem to be bothering her right now.  For those that haven't read my description of the blog, she was diagnosed with congestive heart failure about a year and a half ago.  We've been giving her Lasix and Benazepril daily, with a dose of liquid baby aspirin (from the compounding pharmacy) every three days ever since her diagnosis.  We were told that she would probably only live another six months to a year, so she's already outlived their expectations.  Every day that we still have her is a good day.

Argos:  Last weekend, we got to go on a "Hound Hike" put on by some of the people who have adopted a greyhound through Steel City Greyhounds.  It was a lot of fun!  There were about a dozen dogs, all told, along with their assorted humans.  Two of them were adoptables from SCG!  And while I was tempted to take one of them, we're full up, and I noticed on SCG's website that they got adopted this week anyway.  We walked through Oakland, one of Pittsburgh's neighborhoods, and on into Schenley Park before we decided to turn back due to the heat.  The dogs had fun, and we got some attention from other people, always a good thing!

Tomorrow, SCG is putting on a birthday party for all of the hounds, which should be great fun.  It's at the Lucky Paws Pet Resort, which has a large doggie pool for them to play in outside, weather permitting.  I will be sure to take pictures, which I normally tend to forget... 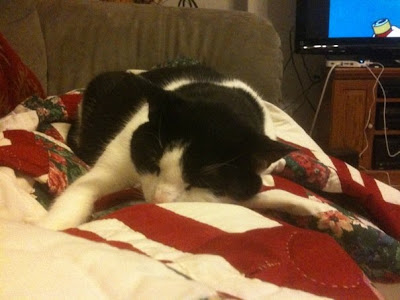 Charlotte, sleeping.  Yes, that lump she is lying upon is me.
Posted by House of Carnivores at 3:57 AM