So, as promised, on Sunday we went to the annual greyhound birthday party, hosted by Steel City Greyhounds (of Pittsburgh) at the Lucky Paws Pet Resort.   It was a blast!  We had fun, Argos had fun, and the other 40+ dogs and their people looked like they had fun.

Here's a few pictures of how it went.  I admit that most of these were taken by my husband...  I was a little overwhelmed by the activity, and stopped taking pictures after I'd snapped a few just so that I could enjoy the afternoon. 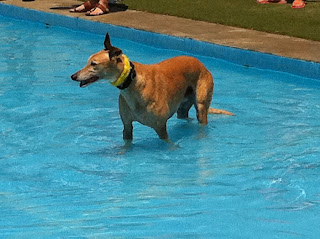 The pool was a big hit with most of the dogs - I wish I could have gotten a picture of them all hitting the water at once, but no mere mortal could have fished a camera out of a purse in that amount of time! 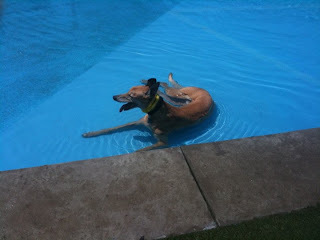 Argos, for one, loved it, and used it to cool down a few times. 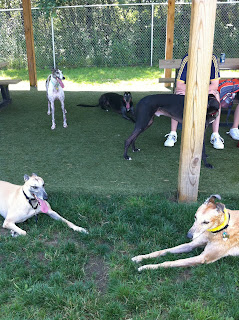 Here's a small cluster of them, resting.  You can see "our boy" front and right.
And here's some very short footage of a bunch of them together, including
the 'gos.  They're not going full greyhound speed because they'd been at it for nearly an hour at this point. 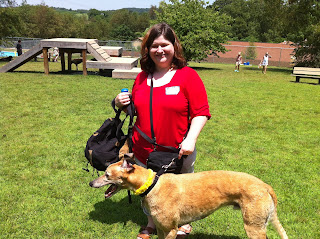 Argos finally "deigned" to return to me, for towel dryings and drinking water. 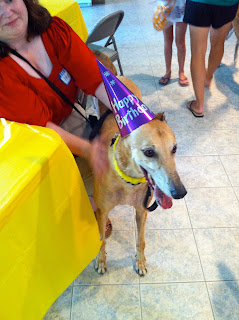 And then we all went inside for birthday treats!  Argos wore this hat for all of ten minutes before he gored someone like a deranged unicorn when he was trying to get his head scritched.
By the time we left, he was practically crawling into my lap, he was so overwhelmed.  I have noticed that we usually have a two-hour window with him before he gets tired.  He slept all the way home in the car, not even stirring all that much when we went through a McDonald's drive-through.
And then once we got home, he slept for most of the evening, only reluctantly going outside for potty breaks.
It was a good day, and I can't wait to go back to the pet resort some day.  I know that their yard and pool are open to the public, so we could take him any time we liked.
Posted by House of Carnivores at 3:38 AM