Argos has been evolving while we weren't looking, apparently, and not necessarily for the better.

It all began at the end of last weekend, when the cat that we were cat-sitting left with her human on Monday night...  she hadn't finished all of her canned cat food, or "gushey food," as we call it.  They preferred not to transport an open saucer of nasty-smelling cat food with them, so I reassured them that it would be fine, that I had four cats that wandered in and out of that room, and that it would probably be eaten by morning.  Problem solved, right?  Ha ha, no.

Argos figured out that there was a plate of gushey food in the guest room right before we went to bed for the night, and was fascinated with it.  We told him "no," and then finally got him crated, so it wasn't a problem for the night.

However, the cats were not keeping up their end of the bargain - they did not eat any of it!  (To be fair, there are at least two of them that don't like it.  And the one that does, Bit, has been in a snit since we got Romeo, and was probably too busy tormenting him to eat it.  And Romeo was too busy being tormented by Bit to eat it, even if he may have been inclined.)

The next morning, Jeff got up to take Argos down for his breakfast, and I started getting ready for work. At one point I had to go down to the basement to get clothes, and when I came up, I realized that Argos had vanished.

In fact, he had tip-toed upstairs, and was happily eating the gushey food when I found him.  Tip-toed.  The dog that I thought was incapable of going upstairs without sounding like a freight train had tip-toed upstairs to get food that he knew he wasn't supposed to have!  I reprimanded him, then took him back downstairs, only to have him try to sneak up there again the next time I turned my back.

I didn't know whether to laugh or be dismayed!  I don't think he's ever tried to be deceptive before; probably because there was never anything that he particularly wanted that I was trying to keep him away from.  On the one hand, I'm glad that he's starting to think for himself a little bit.  He is an enormous velcro-dog, and seems to be half afraid to leave our sides for too long.  On the other, blatant disobedience can never be a good thing.

He's back to being his regular self, now that the gushy food has been consumed and is no longer a temptation.

And here's a picture of Argos, who looks like he would never do such a thing!  His alertness was my first clue that my husband was coming up the walk. 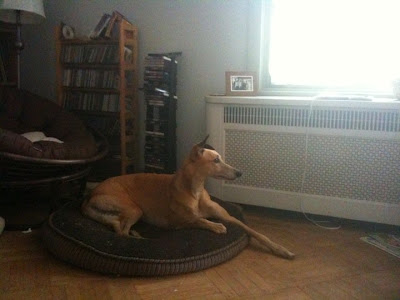 Posted by House of Carnivores at 2:06 PM