These two things don't go together very well, for anyone who was actually wondering.

I decided that this weekend I was going to paint the stairwell and the upstairs hallway, because both areas got missed when we first bought the house and painted most of the rooms.  Last night, I taped everything off and put down drop cloths, then did some priming.

The animals were already in a bit of a tizz, because Jeff is out of town for the weekend and of course they don't like it when we're not here under their direct control!  But when I started moving stuff around and doing things they'd never seen before, they got really worried.

So we had to have a little session in the living room together, while I comforted everyone.  I had all of the animals in the room with me - something that rarely happens.  I had a squirt bottle close by in case Bit and Romeo got into it (and they did, twice) but otherwise was relaxing on the couch.

This morning, I started painting in earnest.  To be honest, most of the cats have completely ignored me today, though Bit supervised me for at least the first half of the day.  She'd sit at the top of the stairs or on the landing and watch me, with a worried look on her little face.  No telling what she thought I was doing...

Argos is actually the only one who had to be put away, and that wasn't until after lunch.  He was fascinated with the paint tray, and was making me nervous, since he kept pacing out and sniffing it.  So for about an hour, he had to be crated while I finished up with the first coat.

Anyway, as this is a pet blog and not a home renovation blog, I'll just say that I'm completely done with the first coat, and will probably go back in and do the second in the morning.  Until then... here's some pics from when I had them all in the living room with me last night... 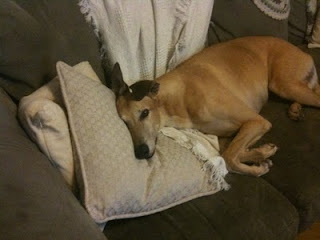 Actually, I lied.  This particular picture was from Friday morning, when I was trying to go to work.  You can see that Argos doesn't really want me to go, hah.  He's good with the guilt trip. 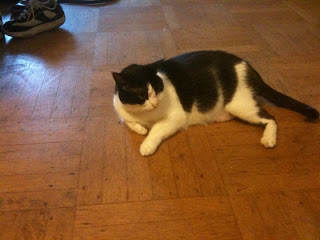 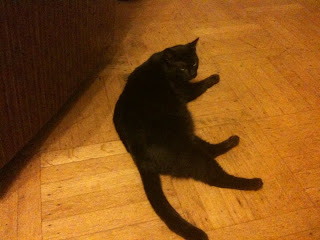 Annie, ever-watchful for someone new to trip. 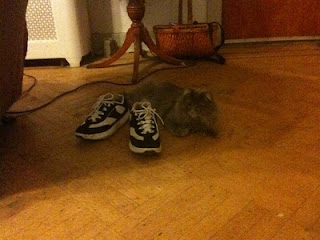 Bit has developed a sudden fascination for my walking shoes.  No idea why, but she's been sitting beside them for most of the weekend. 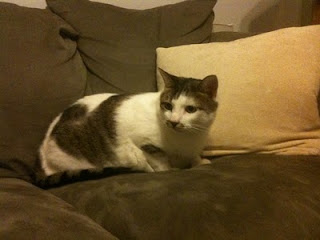 Romeo, stealing the Argos's spot on the couch.
Posted by House of Carnivores at 12:26 PM