We're actually making quite a bit of progress on the whole dog versus cat thing.  Let it be noted that while hostilities do exist, it's not the dog's fault.  He has been very good, and has responded well to our "No Kitty!" training.  (If he even looks at the cats and perks his ears up with too much interest, we would just gently tug on his leash to get his attention, and say, "No Kitty!")  He's sensitive enough that stronger measures haven't really been necessary.  I haven't even had to use the squirt bottle that I bought for that purpose.

The cats are the ones that hiss if he accidentally walks too close.  Annie has bapped him with her paw a couple of times... yesterday right in the face, and he didn't even respond beyond looking up at me like, "See what I put up with?"

But for two days now, Annie has jumped up on the couch with me, even knowing that Argos was there.  Yesterday, she just sat on the arm rest, but today she walked up and sniffed him, and then settled down on my lap.

Charlotte and Bit are still holding out a little more than that.  Charlotte doesn't often deign to be on the same furniture as the other cats, so I don't really anticipate that she's going to warm to him, ever.  She will consent to being in the same room as he is, and she's lost her fear of him, so that might have to be as good as it gets between those two.  Really, as long as there isn't open warfare, I'm okay with that.

Bit is the one who is still the most scared of him, but even she is making progress.  Yesterday, she jumped up on the bed with me and Jeff even though the dog was curled up between us.  Her eyes got really wide, so I could tell that she hadn't known he was there, but she didn't flee.  She cautiously settled down between Jeff's feet and probably stayed for 15 minutes.

She has learned that Argos sleeps in his crate at night, so can't get to her.  This is when she usually visits.  Last night I must have fallen asleep petting her, because I woke up in the wee hours of the morning, with her still curled up under my hand.  So sweet.

Oh, and here's perhaps the most saccharin-sweet picture EVER, at least of our kitties.  I can't take credit for it, because Jeff took it, but I was more than happy to steal it from his blog. 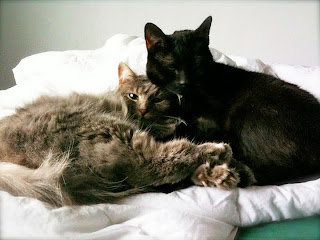 Posted by House of Carnivores at 5:39 AM