Jeff and I both love animals.  We both love cats, but always promised each other that we would never get any animals until we owned a home of our own.  That gave us more control over the situation, and we wouldn't be at the mercy of a landlord.

And we were true to our word.  And then we bought a house, in August of 2008, right before the bottom dropped out of the housing market.  We spent that first month renovating, and didn't actually move in until September 20, which was a Saturday.  My mother flew out to help us move, and was to stay with us all the next week.  By Monday, we were still living out of boxes, the house was in a disarray (though quickly being put to rights by Mom) and I was eager to get settled in and actually feel like I had a home.  Jeff said to me, that morning, "Let's go get cats."

I laughed at him, and said no.  I told him that my mother was here, we had too many boxes, that the cats would have a harder time adjusting to life with us with everything in flux, and that we should wait until we were at least unpacked.  He seemed saddened, but agreed with my good sense, and left to go renew his driver's license.

By the time he got back, I had completely changed my mind.  I'd looked at the Animal Rescue League's website, and saw all of those sad furry faces, and knew that we had to go adopt RIGHT NOW.  And so we did.

We had already agreed that we would be getting two cats, one for each of us to pick out.  I knew that I wanted an adult.  I also knew that I had to feel an instant bond with whichever animal I chose.  That may sound silly to some, but I knew it was possible to share a deep bond with an animal...  I had felt that with Susie, a cat that we got when I was a teenager, and who lived a nice long life with my parents after I had to give her up to move to Boston.  I missed that cat so much, and I knew that I wanted to feel that type of bond again.

So I walked up and down the line of cages (is there anything more sad than dozens of sad, frightened cats in cages?  I swear to God if it were possible I'd rescue every single one of them.) I stared into the eyes of the cats that would let me.  There were several that I could have taken.  That I jotted notes to myself about.  I had just turned to go back up the row, when a cat from one of the bottom cages grabbed me with her claws, and pulled me towards the bars of her cage.  I looked down, and made eye contact with Charlotte for the first time in my life.  And that was it.

I had originally planned on getting a little black cat named Annie (you will possibly remember that I do have a little black cat named Annie. Coincidence?  You be the judge.)  But that moment that I met Charlotte's gaze, she had me.  It had to be fate... because she didn't behave very well in the meeting/greeting room that they put us in.  It was too close to the dog side of the shelter, so she was unhappy and frightened, and preferred to hide in the corner or under my mom's chair than to let me pet her.  When I tried to pet her, she took a bloody chunk out of my thumb with her claws, hissing at me.  If I'd been looking for a cat that was easy to get along with, that was my first clue that this might not be the one.

But I couldn't leave her there.  I had to take her home with me.  Because even if she wasn't behaving well, I had looked into her eyes, and felt like I KNEW this cat.

She didn't exactly endear herself to me in the beginning once we got home, either.  She immediately ran to hide, and tried to stay hidden as much as possible the first week we had her.  I did worry that we'd made a mistake... Jeff's kitten Bit was certainly playful and sociable enough, and I felt a little bit jealous that my chosen one preferred to hide in boxes in the attic than to be with us.

But it all ended up well.  She eventually came out of hiding, we became friends.

She's not the most affectionate cat (unless she wants to be) and is sometimes positively grumpy.  She bullies the other two cats, and has them afraid to approach her at all.  She got sick shortly after we got her, and after many medical tests, we got the bitter diagnosis that she has congestive heart failure. They said she might live a year, maybe a little longer, but not much more than that.  And even then it was medication every day for the rest of her life.

Many people might say that getting her was a mistake, that it wasn't worth the time, money, and heart-ache.  I've had people suggest that we should have put her down immediately, that it was an inordinate amount of money to spend on "just a shelter cat."  I always want to respond to them, "Would you want to kill someone who suggested that you kill your own child if she was diagnosed with a terminal disease?  Because that's how I feel about you right now."

I consider it all worth it every time the two of us make eye contact, or when she jumps up in my lap or onto my chest when I'm lying in bed.  Or when she comes and stands next to me and purrs.  Or even when she stands in front of the refrigerator and howls for milk.

It will break my heart when she does go, but for now, my Charlotte is still with us, demanding milk every night, making her "gronking" noises at me, and looking into my eyes when I pet her. 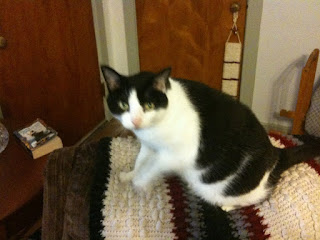 Posted by House of Carnivores at 5:12 PM