Annie was always a hard-luck case, at least until she landed in our house.

Something about her web profile on the rescue website appealed to me.  It said that she was friendly but a little skittish around people, and that she was a little shy.  Her picture even looked shy - she was (and still is) a small black cat, and her photo made her look so wary.  My heart went out to her, and though I went to the shelter that first day with the intention of getting her, Charlotte physically man-handled me and got  my attention.  I took Charlotte home that first day (along with Bit, Jeff's choice) but I didn't forget Annie.

I went back and read her profile again, hoping that it would be updated to show that she had been adopted.  She hadn't been.  The profile said that she'd been in the shelter for so long that she had been sent to a temporary foster-home for awhile because the cage was driving her crazy.  She'd just come back from the foster home, and was stuck in a cage again.  She had been with the shelter for over a year.  I think that the more outgoing, gregarious cats were the ones that were getting adopted, and that shy, timid Annie was continually getting overlooked.  Prior to getting picked up and taken to the shelter, she'd lived on the street in a part of town called the Northside.  No one had any idea of how she'd gotten there or how long she'd been on her own before getting picked up.

I lasted three days, before I emailed Jeff at work saying that I really wanted to go back and get her.  By the time I got home from work on that third day, I was in tears, convinced that the cat was never going to find a home.

An hour later, we were back at the shelter, having left my poor mother and a cooked meal behind in our haste to get there before they closed.  And we brought her home.

Getting Annie to trust us has been a long road.  She still doesn't totally like being picked up, but she does tolerate it better than she used to.  And now she's the one that seeks me out for cuddles and attention, moreso than the other two.  She's also the one that is the least afraid of Argos, so is frequently right in the room with us, even if he is sleeping at my feet or in my lap. 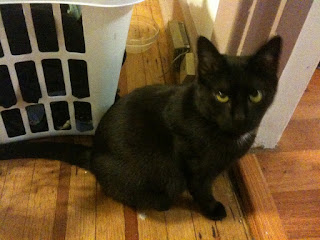 Annie has actually been our trouble-free "child," knock on wood.  No medical bills beyond yearly check-ups, vaccinations, and one horrible itching problem.  No expensive medical testing, no midnight trips to the emergency vet to have two feet of string extracted from her, like some other cats that I could mention.

She loves being a housecat, and as far as I can tell, never pines for her days of "freedom" when she was loose on the Northside.
Posted by House of Carnivores at 6:26 PM