So...  Bit.  Her real name is Q-bit, which is short for Quantum Bit.  Jeff chose this name because of her kittenish ability to be everywhere, into everything, at one time.  I always thought that we'd just call her Q, but it seems that we've settled into calling her Bit. 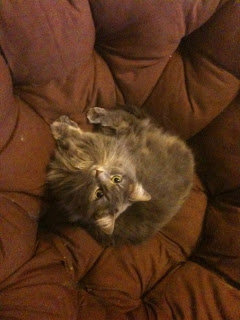 I think I've mentioned in one of my earlier posts that she climbed on top of Jeff's shoulder at the shelter, for protection from the sounds of barking dogs in the next room.  As soon as I looked across the room and saw him sitting there with a little tiny ball of gray fluff on his shoulder, nuzzling his hair, I knew that he was a goner.  There was no way that anyone with any shred of decency could have left her there after that!

We think that she has some Maine Coon in her lineage.  Why do we think this?  First, Google "maine coon" sometime, and look at the pictures.  Compare the way that their faces look with the way that hers looks.  Not all of them are a match of course, but she looks eerily like some of them.  But she also has several other traits that are common with that breed:
Some Maine Coons get to be pretty large, but we're not sure that she will do that or not.  I guess it depends some on the other cat breeds that are mixed in.  She's already pretty large, having surpassed Annie in size.  She's actually just about as big as Charlotte, though not as erm... rotund.  She does have a strange growth pattern, but one that we've started to recognize, so we know when she's going into another growth spurt.  (Maine Coons don't become fully grown until they're 3-5 years old.)  What she does, is she starts to become long, disproprtionately so.  She gets to a certain length, and then will slowly start to fill out.  There will be a lull for awhile, then she'll start to elongate again.

Bit's personality is ... complicated.  She is very sweet and gentle.  She loves attention, but it has to be on HER terms, not yours.  She doesn't really appreciate being picked up, and is very particular about how she'll let a human approach her.  I have good luck with slowly walking up to her with my index finger extended.  She'll sniff the finger, and then it will be okay to gently pet her.  But not too much - she'll probably run away after a few moments.  This will continue for days, and then she'll just randomly get affectionate, purring and rubbing around your ankles, demanding attention and scritchings.  Or else I'll wake up in the middle of the night and she'll be asleep in the bends of my knees.  (She does this with me more often than with Jeff, but I think that's because I tend to pick a sleeping position and stay in it all night long.  Jeff, not so much.)

She is still very frightened of Argos, and tends to keep her distance from us if we're with him.  She is starting to get a little bolder, at least - this morning, she came down to see me in the living room while Argos was sleeping beside me on the couch.  She wasn't willing to come up with us, but was content to let me reach down to pet her for a couple of moments, and then went to the recliner to watch us from relative safety.

She CAN cause trouble, and because of her, I've had to take several precautions that I wouldn't have had to take otherwise.  First of all, my yarn is locked up in a closet, in a sealed tupperware box.  We had to take TWO trips to the emergency room in the middle of the night because she ingested over two feet of string.  (My yarn the first time, and then some kind of twiney string found in the attic the second time.)  We've also come home from work to find an entire roll of toilet paper shredded all over the bathroom floor.  I've caught her in the act often enough that I KNOW it was her.

But we love her anyway.  Life would not be the same without Bit.
Posted by House of Carnivores at 7:14 AM