I've been home from work for a couple of days because of a nasty stomach bug of some kind.  Coincidentally, Argos has been sick with some kind of stomach issue as well, for the past three days.  It was nothing huge and dramatic - he was still eating and drinking and still active, but a couple of times a day would start trying to throw up.  I called the vet about it this morning, actually.  I was told that if he was still eating and drinking and not lethargic that it was PROBABLY not serious, but to keep an eye on him.  To help the symptoms, I could give him 20 mg. of Pepcid twice a day.

Pepcid is one stomach medication that we don't have, and since I've been having issues as well, decided that I'd go get some from the store.  If it didn't help Argos, maybe it would help me.

I got back home and went back to bed.  The bed was completely awash in nice warm sunlight, so it was a good nap.  Argos jumped up with me and stretched out in the sun as well.  (Don't worry, this is leading up to something dramatic.)

Jeff came in (he works from home on Tuesdays) to check up on his sick wife and dog, and came in to sit with us for a couple of minutes.  Then we both noticed Argos licking his lips and swallowing a lot.  Hmm.  Kind of like a human might right before they throw up.

Jeff suggested I get him downstairs for a drink of water.  Just then, Argos jumped down, and started throwing up in earnest on the floor.  It was mostly yellow bile, but with a really large mass in the middle.  Upon closer inspection, it was a washcloth.  Whole, unchewed, undigested washcloth.

What the heck, dog?  No wonder he's been not feeling very well...

Though that doesn't explain MY problem.  So much for my theories of a virulent cross-species stomach virus. 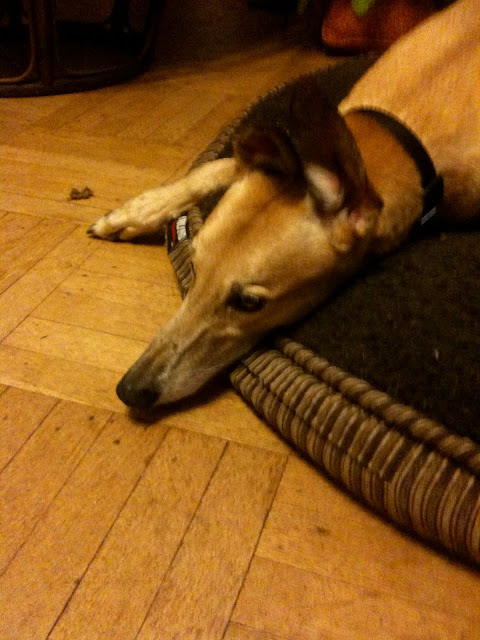 Note to self:  must be super-diligent about keeping that kind of stuff out of reach.  To our credit, he's never shown an interest in eating foreign objects, though I did try to keep hidden anything small enough to easily be swallowed away from him (like stuffed catnip toys for the kitties.)  This is a new tendency, and an alarming one.  If he's willing to eat a washcloth out of the bathroom, then he'll also be willing to eat socks, underwear, panty hose...  gack.  There's a whole new world of possibilities out there.

Or maybe vomiting it up taught him a lesson?
Posted by House of Carnivores at 12:50 PM