I firmly believe that once someone gets a greyhound, they are never able to go back, nor do they want to.  Most people who get a greyhound, I've noticed, have at least two.  I know one family that has seven of them, and one who has six.

They're such noble, sweet dogs - it's impossible not to become totally devoted to them.

Jeff had Argos and the two of them were waiting for me at the bus stop, so that we could all walk home together.  Someone pulled their car over, got out of the car, and begged to be able to pet Argos.

Turned out the poor guy had been a greyhound owner for years, and that his had recently passed away.  He really needed a "greyhound fix."  Jeff was of course more than happy to oblige him.  I hope that the poor fellow is able to bring himself to adopt again soon; he sounds like he needs to have another grey in his life! 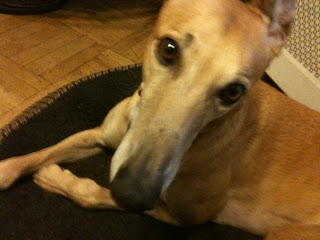 Posted by House of Carnivores at 6:40 PM