I watched an episode of Jackson Galaxy tonight, the episode in which he deals with a Maine Coon with some serious aggression issues.  While I'm always interested in this show, I was especially interested in this one, since we have long suspected that Bit is a Maine Coon cross.  I've read up a little bit on the breed, but really don't know much about them.

The Maine Coon in the show frequently attacked his owners, seemingly without reason.  He stalked them, attacked them in their sleep, and even attacked them after "lights out" when they were trying to cross the room to get into the bed.

I know that a couple of you have dealt with having cats that treated you like prey, and I even remember the solution:  to tire the cat out with play, and to give them an appropriate outlet for their prey-drive, with toys.

Jackson's recommendation for this cat wasn't much different than that.  But something that he said really struck me.  He said that Maine Coons have evolved to be top-notch mousers, protecting the grain silos in the Northeast from rodent infestation (I'm seriously paraphrasing here.)  The instinct to stalk, chase, capture, and kill mice is strong in them.  He didn't say this, but the implication seemed to be that the instinct to do this was perhaps stronger than it is in other breeds of cats.  In the absence of a mouse, you, the dear owner, might serve as a stand-in.

Bit does not stalk Jeff and I.  She is very sweet and affectionate to us.  She is currently sleeping in Jeff's lap, after spending an hour in mine and a few hours in his earlier this morning.  She has a very gentle demeanor with us, and always trills at me with a question in her voice when she sees me, as if she's asking me nicely to come pet her.

But Bit is an utter bitch to other cats, if you'll pardon my language.  Not to Annie, who is her best friend. 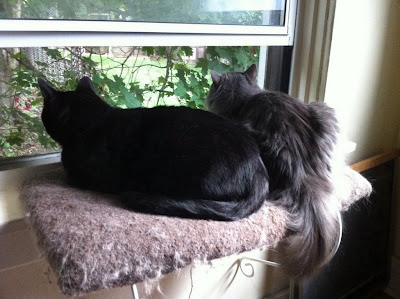 Not to Charlotte, who she has a healthy fear of. 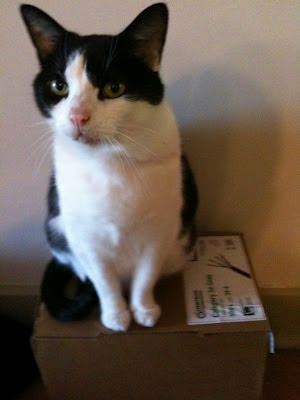 But to any other cat that comes through here?  She is relentless.  She flattens herself to the ground and stalks them.  She spies on them.  She tries to sneak up on them.  She goes up on her hind legs to see them over the edge of the chair.  She pounces on them, backs them into corners, hisses at them, swats at them.  Makes them afraid to leave the corner.  And God help the poor cat who turns and flees from her, because that is all part of the game.  (Some of my longer term readers may remember my descriptions of how she tormented Romeo, a cat that outweighed her by three times, until the day that he died.  Romeo was not a fighter, and would run from her every time.)

It makes it challenging for us to integrate longer term fosters into our house.  It can still work - after all, Mitchell was able to overcome her predatory nature.  But Mitchell never behaved like prey.  His playful nature made him think that everything was a game, so if Bit came after him, he was delighted to have a playmate.  This eventually won her over, but it took time even with him.  Patches did OK with her too, but he is a very confident cat.  He did not give off prey vibes.  (Though interestingly enough, now that he's been gone for several months, he was far less confident when he returned for a weekend visit a few weeks ago.  We actually had to keep him separate from Bit most of the time.)

We're still playing it by ear with current foster Tom.  He is not as fearful as Romeo was, but he might run from her.  (Granted, he might also fight her - he can be very assertive, and has already started standing up to Annie.)  I will not let her torment the foster cats.  Some of them are already freaked out enough without her adding to the confusion.  So it takes a lot of patience, a willingness to isolate her, or them, or some combination of the above, and the ability to go from room to room and make sure that all of the isolated cats are still getting enough human interaction.  It's not an easy job.

But the point that I'm eventually coming around to is...  it never occurred to me that she was just acting according to her nature. Her breed's nature.  I get very frustrated with her, because she's made it so that certain types of cats can never live here, or if they do, I have to accept that they will live in quarantine away from her.  I really, really like fostering cats, and I feel like it's how I can help out homeless cats in my own small way.  But she limits us somewhat.

We don't usually do the more structured play sessions with her - frequently she seems content with playing games of chase with Annie around the house.  Since these chase sessions seem very much to be mutual, they don't concern me.  However, maybe the structured play would make her less inclined to stalk and torment guest cats.  The toy that Jackson used with the cat on the show was a string toy, but with a mouse on the end instead of the usual bird or feathers that I see at the store.  I may look for such a creature this weekend.  See if we can start getting that prey drive re-directed.  I will be very eager to see if we can get her to where she's less interested in stalking the fosters.

I'll update once I have results:  good, bad, or indifferent.
Posted by House of Carnivores at 6:38 PM