We're going!  For those that do not have greyhounds and may not be "in the know" this is a special event that happens every spring.  Greyhounds from all over the country descend upon Gettysburg, Pennsylvania. We've wanted to go since we first heard of the event, but life often conspires to keep us away.

But this year, the planets aligned, both Jeff and I were able to get time off, and everything else seemed to fall into place.  We've booked our hotel room, made arrangements to have my mom-in-law look in on the cats, and are (more or less) prepared for a drive across Pennsylvania with two dogs in the car.  And now it's just two weeks away!

We realized after looking at Maera's paperwork that her vaccinations were going to come due this month, so we took her in to the vet last week to get her up-to-date.  Always a good thing to have everything current when going to an event where there are going to be numerous dogs!

So...  greyhound people.  Are you going?  Anyone care to meet up?  I will never find you in the crowd if we don't make prior arrangements, so thought I would at least put that out there!

Maera MIGHT have to wear a red bandana, which is the event's way of notifying others that the dog is shy, and that people need to give her space.  I really think she'll do OK.  We actually took her to her first meet & greet yesterday, and she did great.  She still tucks her tail when meeting new people, but will still come up for petting, and those that were patient enough to stay around for a few minutes while ignoring her tended to get kisses from her when she was able to work up her courage.  But we're bringing a bandana for her anyway, in case it's all just too much.

Argos I'm not worried about.  He takes most things in stride.  As long as there isn't thunder, he should be OK.  I say this because there was some light thunder during the meet & greet yesterday, which pretty much immediately dampened his enthusiasm for the event.  I'm glad that Jeff was with me, to take him outside frequently while Maera and I stayed and did the greeting.  Normally Argos is Mr. Ambassadog, so I really felt bad for him.


The event coordinators sent a helpful brochure with a list of things to bring to make the visit more pleasant and stress-free.  For those of you who have been to this and similar events - do you have any recommendations for us?  We've never traveled with two dogs before, and I have to admit I'm a little nervous.  Our dogs have never disappointed me before, so I'm sure that they will be fine.  But I still worry. 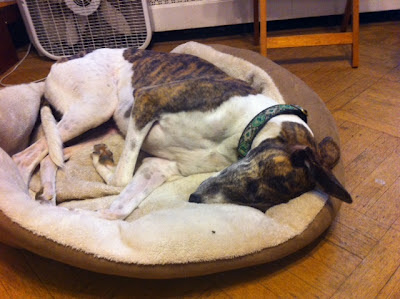 Posted by House of Carnivores at 2:26 PM