We are back from Jamaica! We had a great time, for all that we had to leave our babies behind.  And they all survived the experience, the house did not burn down, NOR did we all get hit by a giant meteor and die.  I worry about the darnedest things.  I knew that I was a worrier, but the laid-back atmosphere of Jamaica actually turned me into a person that did not worry for three whole days!  I think that I've had an epiphany or two. 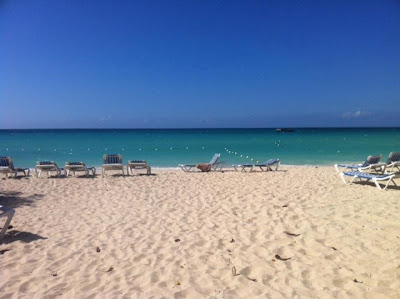 The view from our resort.  I think it was lunchtime, which is why there isn't anyone out there.  This is part of Negril Beach.

I did manage to find a couple of dogs to pet on the beach, which helped me miss my pups a little less.  Someone told me afterward that they were probably feral dogs, which makes me sad for them.  They were well-fed feral dogs, and accustomed to humans, if so.  I suppose living behind a dozen or so resorts does have its advantages, though I'm sure it's not an easy life all the same.

Anyway.  We got home well after midnight on Tuesday.  Our cats were so thrilled to see us that they forgot to be angry, which is actually how it usually happens when we come back from a trip.  Bit was the only one who acted miffed, but when I awakened later that morning, she was sleeping in her customary spot, which is on top of my hip.

We had to wait until 9:00 AM to go pick up the dogs, but I'm pretty sure that we were there at 9:00 straight up, or maybe just a few minutes after.  They were ecstatic to see us.  Poor Argos apparently chose that moment to jump up on one of the staff, and wound up slipping and falling and doing the splits.  He limped out to the car, giving me this hurt look like he was blaming his injury on me for leaving him there in the first place.  That being said, he'd recovered by the time we got home.  At least, recovered enough to leap up on "his" corner of the couch, curling up with a very pleased look on his face.  (Did he miss us, or the couch more?  Do I want to know the answer to this?)

Maera was thrilled to see us and jumped up to give us kisses on the face.  She did not pee everywhere, which I will choose to consider progress!  Jeff also reports that when he got home from work this afternoon, she did not pee either.  (Have I even talked about this yet?  I honestly can't remember.  Maera has this issue where she gets SO excited to see us come home, and wants to please us SO badly that she pees all over the floor.  It's been difficult to train her to do otherwise, since you're not supposed to reprimand for this behavior - it only reinforces it.) More on that later, since I never intended this post to be about dog pee.  I will say at least that we have made progress.