It's been a rather busy day today, as Saturdays often can be.  After giving Argos an early morning bath and giving him a chance to dry off, the two of us (leaving Jeff and Maera at home) drove across the city to the Ross Park Mall.  We had volunteered to do a Meet & Greet event in a new venue - a store called Moochie & Company.  It was a fantastic store!  I imagine that most greyhounds would completely love to be in it...  it has lots of stuff for dogs, but what I saw EVERYWHERE were toys, toys, toys.  Most of them with squeakers.  Which meant that every time new customers came into the store and tried out the squeaky toys, Argos and adoptable hound Flyer would throw their heads up and STARE into the back of the store.

The Meet and Greet went very well.  Argos has a great personality for these events - he loves people of all kinds, and just assumes that the feeling is mutual.  He's not shy about just walking up to someone and leaning against their legs, staring up at them beseechingly for petting.  It melts the hardest of hearts.  Adoptable hound Flyer did an awesome job as well.  You'd have thought that he'd spent his entire life meeting and greeting all kinds of people, for all that he's only been off of the track for a few weeks. 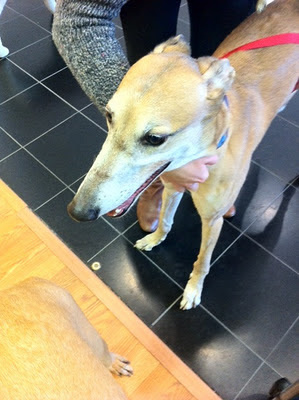 One of the things that Moochie had that AMAZED me was a rack of squeaky toys that were every bit as long as a greyhound.  Argos would eye them with a certain gleam in his eye every time someone squeezed one of them and it made a noise.  I almost bought one, but then worried that Maera would destroy it too quickly - and then we would have a giant orange squeaky toy with the stuffing coming out, like all of its miniature cousins hidden in our living room closet. 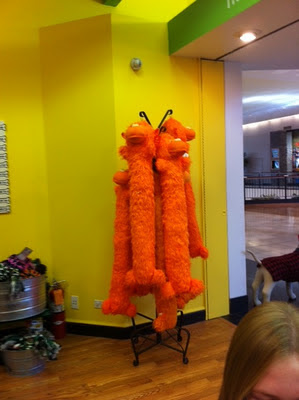 I did buy a couple of other toys for the dogs, however.  One is a long green monkey/grinch looking thing with a santa hat on.  Maera caught sight of this when I got home before I even took it out of the bag, and before I knew it was pulling it out and playing with it.  I'd say that she approves. 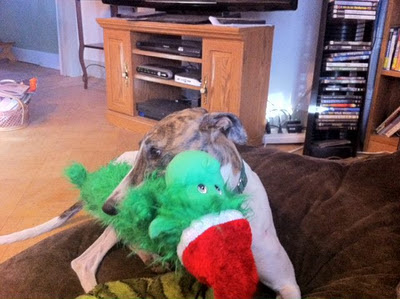 She is now lying on top of it on her bed so that no one else can have it. 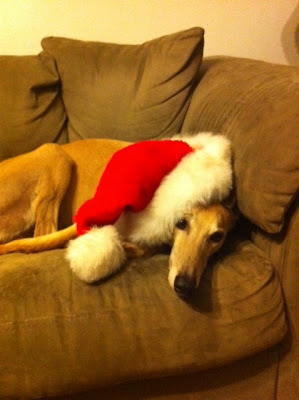 Which makes Argos sad.  Maera stole the best toy AND he has to lie on the couch and have holiday pictures taken of him.  You might think that this is the most glum Santa you have ever seen, but just you wait. 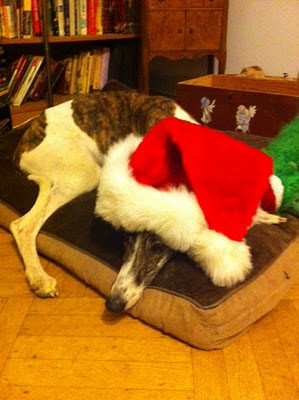 Maera is glum.  She is not allowed to eat the Santa hat. 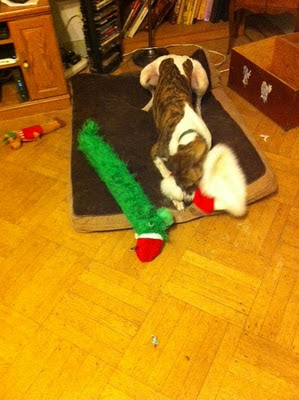 But the most upset of them all, and the one the most lacking in this thing called "holiday cheer" is:

I'm not sure what displeased her more:  that I put the hat on her to begin with, that I started laughing and taking pictures, or that after the third shot, Maera leapt up over the back of the chair and whisked the hat right off of Charlotte's head before running off with it to do a bizarre parade of the vanquished around the main floor of the house.
Posted by House of Carnivores at 4:15 PM