I was going to get on and rant about something tonight, but something came up to distract me.

Kittens!  The Animal Rescue League asked us to foster a late litter of kittens for them until they're big enough to keep at the shelter.  And how on earth was I supposed to say no to THAT? 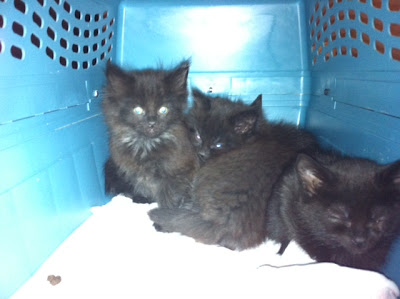 Hopefully I will have more attractive photos later.  They still think that I am a Big Scary Monster (TM) and so aren't hitting their super-model poses for me yet.

Anyway, it is impossible to muster up enough righteous indignation to rant about something bad when you have six sets of little eyes peering at you.  So instead I am going to melt into a kitten-induced coma.

A couple of first night observations, from a kitten-newbie, before I go to bed:

1.  Kittens never stop moving.  There is a seething black pile of undulating fur in my guest room right now.

2.  Kittens have no sense of self-preservation.  Which is why they are in a crate right now.  I have no desire to have to pull kittens out of my box springs, or off of my curtain rod.  Or from under the radiator.
Posted by House of Carnivores at 6:17 PM