I guess it's one thing that you eventually (maybe) learn when you agree to become a foster home for animals, is that after their departures for what are hopefully happy forever homes, life does go on.  I'll keep you posted on whether I'm EVER able to completely learn this lesson.  Patches gave us a nice "soft start" to giving up a foster - he went to my mother-in-law, which means that we knew exactly what kind of home he'd be in, and we knew that we'd get to see him again in the future.  It was a little harder with Mitchell, since we are looking at every possibility of never seeing him again.  But it does help that we know that he went to a good home.

Maera seems to have developed a UTI.  I understand that this is not uncommon in female dogs, particularly young ones.  We took her in to see the vet last week, as soon as I started to notice that something was wrong:  there were a couple of potty accidents in the house, and several additional attempts to potty once outside.  They gave us an antibiotic and an anti-inflammatory after testing her urine and finding bacteria.   I have to laugh at how much easier it is to give her antibiotics than it is for us to do the same for one of the cats...  push the pills into a piece of hot dog, offer hot dog to Maera.  Gulp.  End of story. 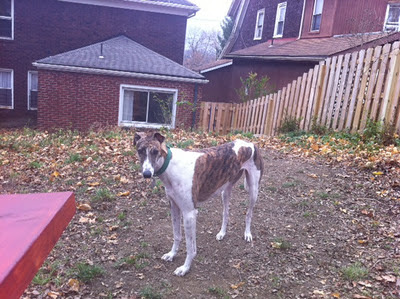 We've been trying to play with the dogs a little more in the yard.  A tired Maera is a much better-behaved Maera, and it's good for Argos to be a little bit less lazy as well.  Usually they can be convinced to chase each other around and around the yard, sometimes we need to throw one of their toys for them to go get. Sometimes, it takes getting down on the ground with them for a little friendly wrestling match.

Both dogs got a certificate after we finished up their obedience training classes on Saturday.  The classes were invaluable training for all of us.  What we got out of them - dogs that have started a more "trainable" portion of their lives.  Maera sits on command now, and Argos will after much grumbling and complaining.  They're getting better about stays, and better about "leave it" and their recall has improved.  But I think that most importantly, Jeff and I have learned how to train the dogs appropriately, and have learned about how to use the clickers/treats to get them to do what we want.

As for the cats, I  think that they miss Mitchell.  Well, Charlotte doesn't.  Charlotte probably would be happy if all of the other cats vanished.

The night after Mitchell left us, Bit paced around the house all night, occasionally crying.  It was like she was looking for him...  the two of them were playmates, Mitchell being the only one who was willing to chase her up and down the stairs.  Annie probably misses him the most:  he snuggled with her and groomed the top of her head for her every day.  But they've adjusted, as they always do when we humans go and mess things up.  Annie and Bit are spending more time together again:  they were inseparable before Mitchell, but when he was around, Annie seemed to choose his company over Bit's more often. 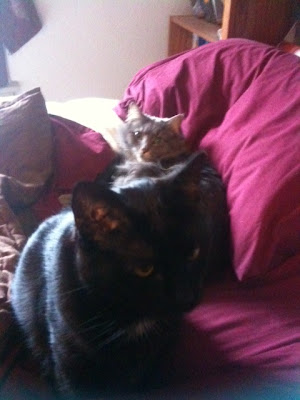 So that's really our lives right now...  the cats are getting used to being Three again, doing lots of snuggling with us in the process, and the dogs are completely unaware that we're short one cat.

Everyone keep your fingers crossed that poor Maera's UTI clears up ASAP.
Posted by House of Carnivores at 4:24 PM