I know those that read my blog regularly or semi-regularly already know that we just adopted a second greyhound.  And you've probably read about some of her personality so far.   I am completely in awe sometimes at how very different she is from Argos!  Not that I expected an Argos clone, but I have to admit I expected a few more personality similarities - even after all of the greyhounds that I've met and blogged about through our adoption program, and seeing all of THEIR different personalities, I was taken a bit by surprise. 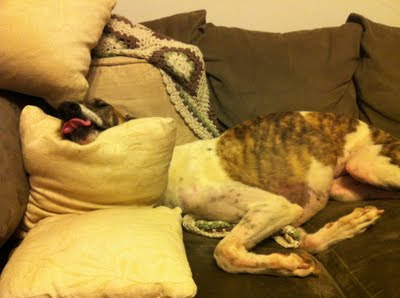 Case in point, the above picture was taken of Maera during a really violent thunderstorm.  Argos was hiding in the stairwell, shaking and drooling and panting, like he does.  Maera took advantage of it by claiming his spot on the couch and...  making this face.  Whatever that is supposed to be, haha.  It makes me smile every time I see it.

She is also something of a watch dog, which startled me to be certain.  I have known greyhounds that barked, and have read many of your blogs about greyhounds that bark, but Argos is so silent most of the time, I guess I never expected it!  But she will faithfully bark at anyone who comes to the door, the guys we hired to trim our trees, or the neighbor's dog (but only when she can do it from the safety of the house; she's a little bit scared of the big mean scary Golden Doodle when they're both outside at the same time.)  I wasn't sure of what I thought of this in the beginning, but you know?  Actually, I think I like having a dog that will bark at strangers coming up to the house.   Maybe it will help deter a break-in if the would be robber hears a large dog barking.  HE doesn't have to know that she wouldn't bite him.  At the very least, she won't let anyone sneak up on me.

Maera loves our attention, and soaks it up like a little sponge when we give it to her.  She is very tuned in to my emotions as well, and if she senses that I'm sad, she'll come over to me and give me kisses and put her head on my chest.  If she senses that I'm amused, particularly if I'm amused at her, her tail WAGS, and she grins proudly at me, and then starts showing off, flipping her toys up in the air, or whirling around like a dervish on speed.

She loves squeaky toys even more than Argos does, and will run over to the toy chest (usually after I've picked up all of the scattered toys and put them away) and drag every single one of them back out.  She definitely has her favorites.  Right now one is an orange hedgehog, and the other is a long purple weiner dog.  She carries them with her everywhere she goes, kind of like a security blanket.  I swear she's going to try to take one with us on one of our walks.  One of these days.  When it isn't so swelteringly hot that we start taking walks again.

Unlike Argos, she is not afraid of the laminate kitchen floor, and regularly goes back there on food-hunting expeditions *sigh.*  She hasn't tried to counter-surf yet, but I've seen her trying to see over the edges a few times.  I suspect the only reason it hasn't turned into full-fledged surfing yet is because we are always around to ruin her fun and make her join us in the living room.

Which brings me to her limitless curiosity.  She LOVES exploring the house, and everything in it.  What this means is that nothing is safe from her...  it's like having a bright-eyed, precocious toddler around... unless she's sleeping or playing with a squeaky toy, she's getting into something.   Even with Jeff having worked from home every day since we got her, we are not ready to leave her on her own in the living room unsupervised for an entire workday.  He has to physically go back to work tomorrow, so as much as I don't like crating large dogs all day, I think we're going to have to, for her own safety.  I have images in my head of coming home to chewed television cables, books pulled off of the shelves, houseplants knocked over and nibbled upon.  I'm sure that we'll get her to that point eventually, but I'm big enough to admit that we're not quite there yet.

We're still keeping her completely away from the cats.  She includes them in her curiosity about everything in the house.  Even if I don't think it's a big prey-drive thing, until we can teach her to treat the cats with respect, we have to keep her separate so that no one gets hurt. Once life settles down again (now, please?)  I'm going to start working with her on that...  in the room with the cats, on a leash.  We'll use the same technique that we used with Argos when we first got him:  as soon as she shows more interest than is warranted, we pop the leash to get her attention and tell her, "No Kitty."  I think it's going to take a little longer than it did with Argos... she's not stupid by any definition, but she in her excitement often forgets lessons that we've taught her.

So that's where we are with Maera...  there is never a dull moment!  She is absolutely adorable and adorING.  She is definitely going to be our trouble-maker though!
Posted by House of Carnivores at 1:56 PM