I know that I keep vanishing, but this has been one crazy summer.  I always mourn the closing of a summer...  I live for the living, green and growing things, and to watch them all die back (even if it comes with a fabulous color show) depresses me...  possibly because in Pittsburgh, the sun goes behind the clouds in November, and ambles back out, slowly, sometime between April and May.  Between that and all of the dead looking trees and dirty snow, it can really bring a person down.  That being said, I'm almost looking forward to Fall this year.  But only if it brings a little bit of rest for yours truly.  If it doesn't do that, it can go hang itself.

Many of the things going on this summer are annoying and personal and not fit for this blog, but one thing that was hanging over our heads was that my 11-year-old car, which I purchased new, was starting to show signs of wear.  We were faced with a decision...  pay $850 to make it pass inspection, or buy a new car by the end of the month of August (when the old car would cease to be street legal without the proper stickers.)  We decided on the latter... and bought a new car yesterday!  One of our requirements was that two greyhounds be able to fit into it with ease.  The other was that it had to be fuel efficient, because my husband has quite a distance to drive to and from work on the days that he has to go in.  This is a tall order to fill, and some might be surprised at our choice... 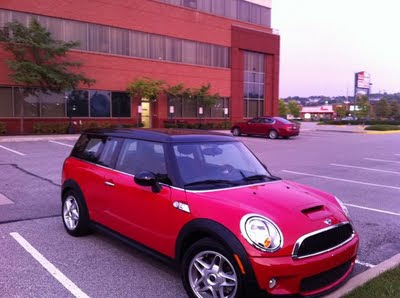 One doesn't think of a Mini Cooper as a dog-friendly vehicle, but one of the models is a Clubman, which has more space than the regular models.  So...  here is a picture of our Mini Cooper S Clubman!

The back seats fold down, and we've already put the dogs up in it.  There's plenty of space... though they're still getting used to it and were incredibly nervous during their maiden voyage in it last night.  We're going to have to work on that!


There are tons of people, apparently, who get the Clubman and haul around dogs even larger than ours, sometimes in greater quantities.  Pictures of dogs in the back of Clubmans flourish out there in the internet ether!  So, to add one more: 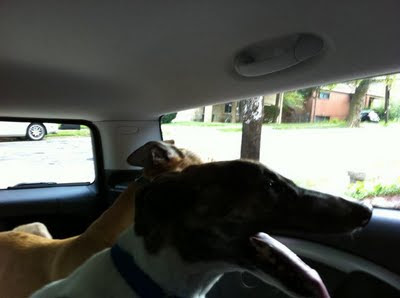 I'm sure that there will be others, but this was the best that we could do.  They were so excited that I couldn't open up the back doors to get a good shot, because they would attempt to leap out!  And we're still working on doing that without their leashes getting tangled up with themselves, each other, me, and any innocent passers-by.

But enough about the car.  As excited as I am about it, I'm sure that you didn't check my blog to get a car update!

Everyone (and by everyone, I mean my animals) seems to be doing really well.  I've been waking up every night to find Bit curled up next to me, which is kind of nice.  I think that she's looking out for me while I struggle to get over a bit of bronchitis that I have been stuck with FOREVER.  She always scolds me when I get up in the middle of the night, and then scolds me when I come back, but she lays back down beside me regardless.

That I have bronchitis means that I've hauled out the Vicks Vaporub to make sleeping easier.  Some of you might recall that Annie-cat loves Vicks Vaporub, and treats it like it is catnip.  Not only will she attempt to lick it, but she'll rub her head in it and then start rolling around on the bed.  This means that I have a fight with her every night before I fall asleep, because she is trying her best to crawl under the covers to get to all of the lovely vapors, even to the point that she tries to dig through the covers.  This makes it very difficult to sleep.

Maera is coming along quite nicely, and I no longer completely tense up when she's loose in a room with the cats; she for the most part completely ignores them, and can be easily distracted from them if she's looking at them with too much interest.  We still don't leave her unattended with them, but she's no longer leashed or muzzled.  The only time that she shows any particular interest is when they get up on ledges or high up on furniture, and that's because I think she envies their ability to climb and explore things that she can't! 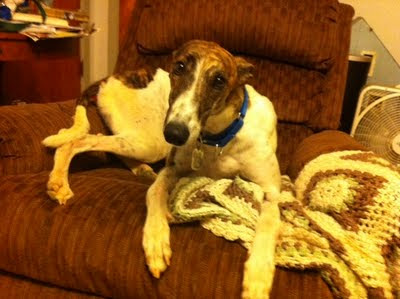 Look at that face... now can someone advise me on how to say no when she employs those puppy dog eyes in my general direction? (Just kidding, kind of.  I withhold table scraps from her no matter what looks she gives me, but I do find myself going over to the "treat closet" more than usual these days.) 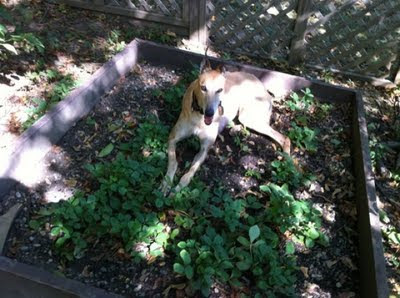 I feel a bit bad for Argos... it is so hard for him to get one-on-one attention from us these days, and not because we're trying to ignore him!  But Maera is definitely a wilder spirit than he, and she tends to tornado her way through the room whenever she sees that he's getting special attention, and demand attention for herself.  I try to discourage this, and try to compensate by giving Argos more attention than usual, but sometimes he seems a little sad.  I'm sure he'll adjust in time; he's very patient with Maera in so many other ways, but I still feel a little guilt over that.

Sorry, no cat pictures.  I'll try to make up for it later in the week, with some new ones.    The kitties are doing well, but they just aren't having their photogenic moments when I have a camera handy.
Posted by House of Carnivores at 5:29 PM