The Most Dangerous Questions in the World

There are many dangerous questions that one could ask, but I have always thought that the two most dangerous are closely linked.  Because to ask them may well bring revolutionary change.

1.  I wonder how that other guy feels about what is happening to him?

2.  How would I feel if I was that guy, in this situation?

Because of course asking these questions is the beginning of something called empathy, and to feel true empathy for another being, particularly one in trouble, should prompt one into feeling compassion, and then to wanting to do something to help.  True empathy (passion, pathos) and apathy (lack of passion, pathos) cannot exist together:  one will surely choke out and kill the other.

Which explains exactly why we humans have, back to the very dawn of time, been able to look the other way and not help others that are suffering, whether it's other humans or animals.  And it explains why so many people know what happens on factory farms, in animal shelters, in hoarders' houses, in the fighting pits, and yet so many decide to ignore it, pretend that it doesn't exist.  Apathy.  And generations of dogs and cats are born, live miserable, flea-bitten, hungry lives, and die in pain, while we drive to work in our air-conditioned cars, get angry if we have to wait in the grocery store check-out line for longer than five minutes, eat our three squares a day, watch our television programs, and then do it all again the next day.

I know that I've posted on apathy before, and how it prevents so many potential animal rescues and allows so many needless animal deaths.  I guess that I'm worrying at this like a dog after a bone.  I believe that we have, as a species, treated animals cruelly and capriciously, and I believe that we have much to answer for.  I've always viewed the "dominion over the animals" thing as more of a "stewardship of the animals" thing.  And let's face it, we've been some piss-poor stewards.  (Many of my readers being the obvious exceptions.)

I listened to a presentation made by a veterinarian a couple of weeks ago, and he said that present-day society was very concerned about the welfare of animals, much moreso than in the past, but that he thought that he saw some of that starting to slowly erode away.  He wasn't certain of whether it was economic woes or some other factor causing a hardening of the collective heart.   I hope that he is wrong.  I can read many blogs out there in the pet blogosphere, talk to rescue people, and feel like maybe he IS wrong.  That people aren't going to cycle back around to "animals only as commodities and only when convenient" mindset.  But then sometimes, when I talk casually to just random people, I see how many people are astounded at how often I volunteer to help at Steel City Greyhounds.  Or that I'm fostering for the Animal Rescue League.  Or that I have multiple rescue pets.  Or that anyone would even think about wanting one of Michael Vick's dogs.  Or that anyone would actually pay for medical care for their pet.  And it is in those moments that I fear that maybe this veterinarian was right... and it is a chilling thought.

Friends, let's not let that happen.  I know that there are some much bigger players than I out there that are working hard for animal rights, and for ethical treatment of animals, and I applaud them.  But I'm just small potatoes... I don't have a national platform, I don't have lobbying power, I'm not the head of a multi-national corporation.  But what I do, and what anyone can do, is just to talk to people.  Talk to friends, to the "lucky" soul who sits next to you on the bus, the person who is standing in line with you at the grocery store, your family members, your co-workers.  I try not to be obnoxious about it, but I do try to influence people towards making the lives of animals better... whether that's convincing them to adopt, convincing them to spay or neuter a pet, piquing their curiosity about what it is like to foster, or even just being brutally honest when they ask you about euthanasia rates at shelters, or what happens to those racing greyhounds that are too old to run anymore, if no one adopts them.  Or telling them, when they ask, just how some of Michael Vick's dogs died (I've run into many people who just assumed they were "just" being shot in the head and were appalled to the point that they thought I was lying when I told them the truth.)

I think it's a little harder to be apathetic about something when you're faced with the cold, hard truth.  So let's make it harder for people to look the other way.  Maybe it will light a bonfire in their souls.  Maybe a new animal crusader will be born.  (Or maybe co-workers will start avoiding you in the hall, but I guess you can't win them all.)  But you will not have to say that you didn't try to make a difference in your world.

This hopefully not-too-heavyhanded post is brought to you by Annie, who has apparently decided to take over paying the monthly bills. 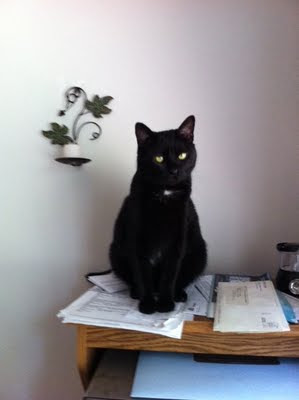 Posted by House of Carnivores at 5:14 PM