We have a new addition to the family!  He is a beautiful cat, white and brown with a cute mustache (I'm not sure if the markings have a name.)  He came with the name Romeo, and we like it well enough that we're just going to keep it that way instead of changing it on him. 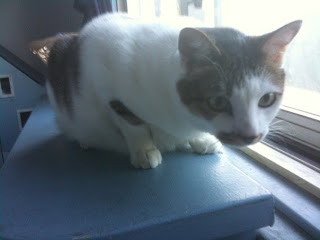 He is a very large cat - part of that is that he is extremely overweight - we will need to put him on a diet.  But he's also just a big cat.  It's not too obvious in the picture above, but you can get something of an idea in the next picture: 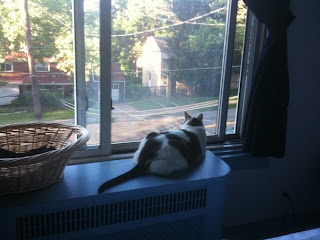 How did we come to this decision, to adopt a fourth cat?  People who didn't think that I was a crazy cat lady before probably do now!

Well, Jeff and I had been talking about adopting a second greyhound, but finally admitted to ourselves that we simply do not have the space.  It's not just about the sleeping crate, although that's certainly part of it.  It is amazing how much space a single dog can take up in a room, even without trying.  We would need a larger house to accommodate a second dog, or perhaps a ranch-style house without all kinds of up and down stairs.

So...  we decided to adopt a cat instead. I've been agitating for awhile to adopt a fifth animal.  One of the little known facts about living in the city limits of Pittsburgh is that by law, you are limited to five animals.  I have apparently decided to interpret that as the only acceptable number to have, and couldn't rest with only four!

I was completely sold on the idea of adopting a BLACK cat.  I'd read that statistically, black cats are the hardest to adopt out; people aren't drawn to them as often as they are to other cats.  And the local shelter, the Western Pennsylvania Animal Rescue League, was bursting at the seams with unwanted black cats - mostly middle-aged males.  I found two that I felt most sorry for on their website.  Xander and Redman.  Both had been found as strays, but had already been neutered, so had clearly had homes before ending up on their own.  Xander was up for adoption at one Petco, and Redman was at another.  I'm always eager to adopt animals that no one else wants - this is why I generally like to adopt adults instead of kittens, though the kittens are so dang cute.

Well, we met both cats (and one other black cat named Chase)  and none were suitable for our house. Anyone who knows me knows that it would have been a very difficult thing for me to walk away from an animal in need - but none of them were good with other cats. at ALL.  And we're not just talking aloof - they were actually very confrontational, even violent about it.  We have Bit, a playful Maine Coon, who would take the brunt of their rage most of the time, because she doesn't have the common sense to leave well enough alone. And we have Charlotte, who is the dominant one in the house, but is also terminally ill and therefore shouldn't be put in a position where she is going to be continually challenged and picked on.  We decided it was in the best interest of the household to pass these cats up.  Hopefully someone with no cats (and with Xander, a firm hand and a lot of patience) will adopt these cats soon.

We were trying to decide what to do at this point - do we look at the other  (non-black) cats at the Petco, or do we hold out for a black one and visit the animal shelter itself?

We decided to get Romeo.  He was lying on the floor in the back of the cat enclosure, looking glum.  He responded well if we paid any attention to him, but didn't seek it out.  He seemed kind of depressed...  all we knew is that the owner had surrendered him due to allergies.  He's a large cat, and didn't fit in the cage so well.  He was seven years old, so would probably be difficult to adopt out.  People generally want kittens, and if they're willing to get an adult, want the youngest adults possible.  I do understand... you want to keep your pet with you for as long as possible.  But the older ones need homes too...

On the way home, we found out some disturbing news when I looked at his online profile on my iPhone:  the owner had NOT surrendered him due to allergies, as we had been told, but because he had stopped using his litter box.  Yikes?    According to the owners that surrendered him to the shelter, their new baby had upset Romeo so much that he stopped using the litter box. They'd had him for six years.

After sheltering and caring for an animal for SIX years, why in the world would you get rid of it? (With the exception of allergy sufferers, or those with an animal that becomes threatening.)

I have to admit, I was a little nervous about the litter box thing.  I mean, NO one wants their house to smell like cat pee.  If a new baby upset him so badly, how was he going to do in a house with three other cats and a greyhound?

We brought him home and put him in isolation:  there is no sense in forcing a confrontation with our horde until he's more settled in.  He has the guest room, a pan of litter, and some food and water all to himself.  And... he uses the litter box just fine, even though his world has been turned upside-down.  Whew!   This  makes me think his former owners are big fat liars.  I guess saying that he was having litter box issues sounded better than "Well, we had him as a placeholder for a child, and now that we have a REAL child, we don't want him anymore."  Never mind that such a serious behavioral  issue COULD have just gotten him euthanized instead of placed in another home.

Anyway, I will not rip into them - I don't know them.  Maybe they actually did have a compelling reason to surrender him to a shelter.  I doubt it, but you never know.

Most of the time, he stays under the guest room bed, and refuses to come out.  But he's been coming out more and more often to sit on top of the radiator cover and gaze out the window.  Getting a glimpse of his new kingdom?  While he's up in the window, he welcomes petting and purrs and makes the little "happy feet" massaging motions with his front paws.  But once he's under the bed, he wants to be left alone, and will NOT come out for anyone. I suspect that eventually he'll be a very loving, cuddly cat, though.

Right now, we have two baby gates set up, one on top the other, so that there is a nice, tall barrier between him and the rest of the household but also lets him see out into the hall (and the other cats can see in, to satisfy their curiousity.)  It seems to be working pretty well - the other cats are intensely curious about him, but don't seem to have much animosity towards him. They were all gathered around the gate, Romeo on his side and the "girls" on the other, and they were all hissing at each other.  Which is a normal part of cat introductions, so I'm not particularly worried.

I have no idea of how he'll react to Argos, because so far, the two have not met, interacted in any way, and probably have not even seen each other.  That's an introduction that we will have to proceed with carefully, and I'm perfectly willing to put that off for a bit until Romeo gets his feet back under him.
Posted by House of Carnivores at 8:29 PM