Our cats are terribly bossy lately, I've noticed.  It's like they decide that something has to be done at a certain time or a certain way and they do NOT LEAVE OFF.

When Charlotte wants milk, she bellows at us from the kitchen... even if we are upstairs sleeping. Even if it's 1 AM.  What kind of cat bellows, seriously?  But she's bossy about other things as well.  She is very attached to me, and will frequently join me in whichever room of the house I am in.  But she has an innate sense for when I'm out grocery shopping.  She will be waiting for me at the door when I return... if we've left the main door open, I can see her, staring through the glass, just waiting for me to come up the walk.  But don't think that it's all affection for me... her eyes are not on me when I come to the door, but on the BAGS.  And then she follows me to the kitchen, making little gronking, scolding noises until I put the bags down for her to sniff.

Bit is also bossy, though sometimes it is a little difficult to know what she is trying to get you to do... she's terribly non-specific.  But there is one thing that she is very clear about - and that is Petromalt, which she adores.  Petromalt, as I have explained in past posts, is a flavored paste that you can give to cats that are susceptible to hairballs.  But as a maintenance product, you're only supposed to give it to the cat twice a week.  So we give it to her Wednesday and Saturday nights.  But EVERY night she leaps up onto the bed as soon as we go upstairs, demanding Petromalt.  Over and over and over again.

The rest of the time she follows one or the other of us around, crying constantly, as if she wants something.  I don't always figure out what she wants.  Attention?  No, as soon as you give it to her, she runs away.  Food?  Sometimes that will work, particularly if I'm cooking chicken.

Annie is even getting kind of bossy, and she's supposed to be the shy one.  She jumps up onto my lap, purring, wanting attention.  To the point that she sits on my laptop so that I don't have any choice in the matter.  This can happen several times a day, so it never gets old for her.  If I'm walking around when she wants attention, she will run in front of me and THROW herself to the floor, crying.  My choices:  step on her or stop and pet her.  You can probably guess which result she is aiming for.

Argos is the only animal that doesn't boss me around.  He asks.  He's not above showing you that he is excited - as shown whenever I walk too close to the leash.  He wants you to see that he's ecstatic about the leash and about going outside so that you'll feel guilty for not taking him out.  He's actually gotten a couple of extra trips outside this weekend using this technique.

Yes, I'm a big softie.  It sure doesn't take animals long to figure that out... 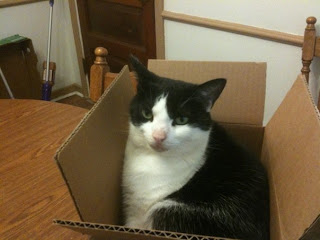