Happy Thanksgiving, everyone!  Well, for us Thanksgiving hasn't even happened yet...  Jeff has a nasty cold/sinus infection and so we postponed the feast until Sunday when we could all enjoy ourselves more.  Fortunately, his symptoms have gotten SO much better in just 24 hours, so I don't anticipate that Sunday is going to be a problem for us.  So now, instead of being in a turkey coma with a large swath of the country, I'm still drooling over the idea of eating all of it.

We still have the foster cats that I mentioned at the end of my last blog post.  They were intended to be much more short-term, but they all came down with some pretty severe upper respiratory infections a couple of days after we brought them home.  The shelter gave us some antibiotics to fight off any opportunistic secondary infections, but it was a nasty bout of symptoms...  I've never seen cats sneeze so much, or have quite so much mucus up in their sinuses.  I've also never had cats stop eating because of URI symptoms.  It was all very scary, but we've come out the other side, and except for the occasional sneeze, they're almost back up to healthy again.

So, you may be wondering, just who are these kitties?  What's their story? 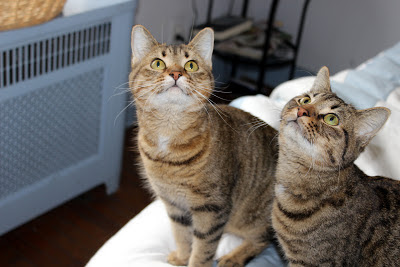 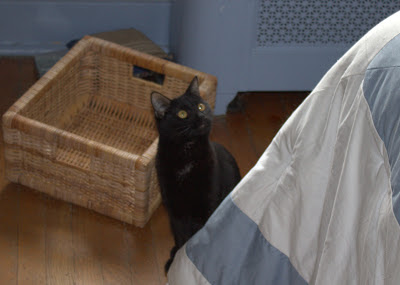 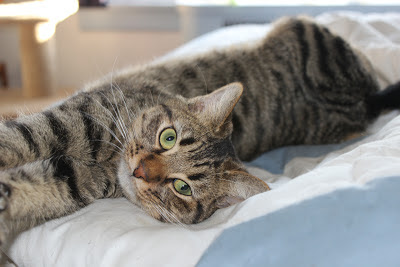 They all came as a family unit.  They're all one-year-olds, and I suspect that they are litter-mates.  I don't know much beyond that, except that their paperwork says that their owner died.

I went in to the shelter that night intending to take two healthy adults home with me - the foster list had gotten an email earlier that day telling us that cage space was at a premium, and that there were a number of cats that really needed to go into short-term foster until cage space opened.

Actually, I should backtrack a little bit.  The FeLV positive kittens took an emotional toll on us, and after their new mom adopted all of them, I said that we needed to take a break.  I said that we'd need to go through the holidays with no fosters, and that after that, I would consider doing it again.  My resolve lasted for...  two and a half weeks.  I didn't even make it to Thanksgiving.

Anyway, so I wound up at the shelter that night, and saw a cage of what appeared to be three scared looking kitties in it.  I agreed to take them - after all, three is not any more difficult than two, right?  But as we were peeling them off of their terrified kitten pile, one by one, to put them in my carriers, a FOURTH head popped up.  Well, I am not the type to harden my heart and tell them to start putting cats back in a cage after I'd already decided to help them, so I agreed to take all four.

They're the sweetest, most adorable, friendly cats.  Dante likes to show you his belly, as does Emily, who will purr if you so much as look at her.  (Though she is a little shy, and will require some coaxing to come out at first.)  Christina is bold, and is definitely the queen of this little pride of cats.  She likes to sit on your chest, and gets very unhappy with you if you move.  Edgar is a little scared and shy at first, but is a friendly, snuggly boy who is desperate for your attention once he realizes that you're friendly.

Even though I don't know much about their history, I can know one thing after just a short time interacting with this group of cats - their previous owner loved them very much, because they're clearly used to giving and receiving lots of affection.

They'll all have to go back to the shelter, and I'm guessing soon.  They're very adoptable, young adult cats, and having them sitting in my home isn't doing them any long-term favors. It will break my heart to take them back, but it HAS to happen.  We are not equipped to absorb even one more permanent cat into this household, let alone four.

I will do this thing. 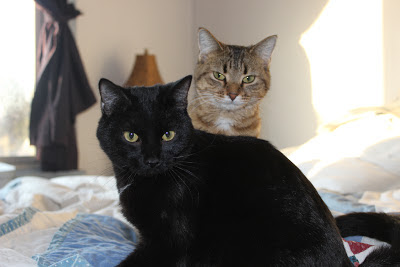 Posted by House of Carnivores at 1:18 PM