Pittsburgh was supposed to get some weather from Hurricane Sandy, as did much of the Northeast.  We didn't get it, or at least not like we were supposed to.

Oh, we've gotten rain, and a lot of it, but none of the winds and flash flooding that had been predicted.  I'm so thankful for that!  (Though I feel terrible for those that DID get hit hard.)  I think all of us feel a bit bad for complaining when so many lost everything to the storm...  though if I can submit a teeny tiny complaint...  I haven't seen sunshine in a couple of weeks.  Bleah.  The world is shrouded in gray.  But at least I can look out my window in my safe warm house at the gray.

The rain that we have gotten has driven most of the leaves off of the trees...  which makes me glad that Jeff and I got some good pictures when we took the dogs to the park before all of this began. 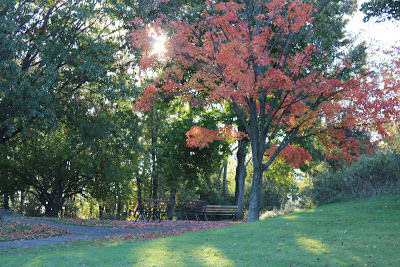 It was really just an exercise to get out and use my new camera... I think that the photo quality is pretty good, considering that I was just treating the camera like a glorified point-and-shoot and not using the manual setting.  (I WILL do this.  I've taken a class to give me the basics.  But now I need to practice a little to get everything just right, with lighting and shutter speed, etc.)


It was chilly that morning, and I think that both of us were wishing that we'd worn warmer coats.  There was even frost on the ground! 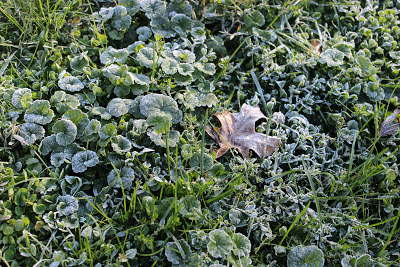 The dogs thoroughly enjoyed themselves, as they always do.  We kept to ourselves, staying on the leash-only paths and not going to the off-leash exercise area.  I have to admit that some of the antics at the dog park make me nervous, even early in the morning.  So even though the people that congregate there with their dogs seem like very nice, stand-up people, I'm a little uncomfortable just letting the dogs loose there. 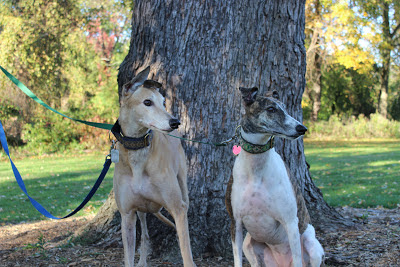 This picture was meant to get Argos and Maera both looking straight on at the camera.  You can see how well THAT worked, but I decided that the end result was better this way.

If you're wondering what they're looking at, someone walked by up on the trail with a dog.  They wanted so badly to go over and meet the new dog!  (But I'm a big meanie pants and didn't let them.)

I think that the dogs are probably wishing for those sunny if cold mornings in the park, or at least our frequent walks around the neighborhood.  But every day it's been soggy and raining great big cold droplets, and I've decided that the dogs would be just fine in the backyard. 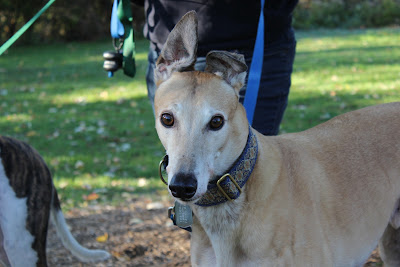 But I did notice today that they seem to have a lot of restless energy.  And Argos is very intolerant of Maera getting into his space, and air-snaps at her, or barks at her to warn her away.

And Maera snapped at one of the cats tonight, for invading her space.

All of this would go away if we can get a good walk in.  I'm hoping tomorrow will be decent...  I DID see the sun peak out briefly this afternoon (and when I say brief, I mean brief; maybe ten minutes.)  But maybe that's a harbinger of better things to come.  I can hope so, because I think that everyone has a case of cabin fever! 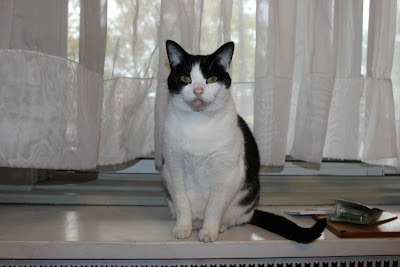 Well, okay, just the dogs and the humans.  The cats, who wouldn't be going outside anyway, could care less.

They get more snuggling when we stay in, and since the weather is turning colder, they think that's a good thing!

Charlotte, on the other hand, just wants for me to get the camera out of her face.

I hope that everyone is having a good weekend!


Posted by House of Carnivores at 8:28 PM