And there are some rules that I enforce.  The top few, in no particular order, that I do not budge on:

1.  No eating of humans.  This means you cannot put my entire face in your mouth, Maera.  Yes, even  if you don't use teeth.

2.  One dog per crate.  Not to keep picking on Maera, but she IS the one that tries to crawl into Argos' crate with him sometimes.  This makes him crazy, and angry, and confused, and no one wants to see that in normally mild-mannered Argos.  That's HIS sacred space, and I let him have that privacy.

4.  No tormenting of foster cats, Bit.

5.  No dogs chasing cats.  For any reason.  Even if the cat is being silly and needs to be chased.


But then there are the rules that fall by the wayside.  Either they're too much work to enforce, they were impractical to begin with, or they just don't apply to the situation.

Some of those in my household are:

1.  After reading some dog training materials, I determined that when the dogs and I came home from a walk, that I was to ALWAYS precede the dog into the house to show that I was dominant.

Ha.  This one went away within the first week we had Argos.  First of all, Argos was not trying to be top dog.  He was desperately trying to figure out what we wanted him to do, so that he could please us.  Second, greyhounds are LONG.  It was very difficult to manage getting me in, then him in, while holding open the door and not having it close on his tail without letting a cat outside.    Sometimes I have to give him a gentle PUSH to get him to go in before me, but it really, really is more practical.

2.  No dogs on the human bed.  I guess we do stick to it a little - we generally don't let them sleep with us at night.  They have crates with big soft beds in them.  Greyhounds do not make it easy for anyone else to share a space with them at night - plus putting them in crates doesn't set the dogs and cats up for an unfortunate nocturnal misunderstanding.  (And actually, Argos wants to crate at night.  We call it auto-crating.)

But they nap with us during the daytime.  And Maera sleeps on the bed sometimes when we're all upstairs.  It keeps her happy, I know where she is, and she isn't hurting anyone.  So, another rule bites the dust.

3.  No scratching on the furniture.  This is actually a rule that I would LOVE to enforce, but anyone with cats knows that this one is a difficult one.  Yes, they have scratching posts and pads.  They seem to just enjoy scratching the furniture.  I stop them when I'm in the room, but I can't and won't monitor the furniture 24-7.   I haven't gone so far as to get Soft Paws, and of course I would never dream of declawing them...  I'd rather deal with scratched up furniture, and the Soft Paws just sound like something that is going to get eaten by someone. So, it's throws and slip covers for the rest of my forseeable future.

4.  No cats on the dining room table.  I lost that one a couple of years ago when Romeo (RIP) starting sleeping on it to keep away from Bit.  I could hardly fault him, so didn't enforce it like I should have.  And I have caught glimpses of Annie on the table. 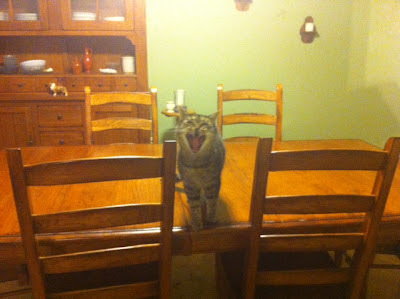 This is Tom, last week, being pretty blatant about it.  He looks like he's getting very stroppy with me about it, but in all fairness, I just caught him in mid-yawn.

I stick with my rule that the dogs are not allowed on the dining room table, though.  I will hold firm on that one.


Posted by House of Carnivores at 8:20 PM