I didn't even realize that it was Black Cat Appreciation Day until I started to see blog and Facebook posts...  I'm pretty far out of the loop.

But I couldn't help but to pause and think about the black cats that have shared their lives with me.  I am so grateful for each and every one of them.

Susie -  a little black ball of fluff that I brought home from a farm when I was a teenager.  She lived 18+ years, and though she started out as an outside cat, she always knew that she was meant for a life of luxury indoors.  She became a house cat after a couple of years, and never looked back.  She never even wanted to go outside.

Harley -  a half-starved alley cat that I rescued while it was begging for food in a McDonald's parking lot.  I was 18 at the time.  He lived with my family for a few months before he came to a tragic end, but he was HAPPY with us.  You'd see him riding on my dad's shoulder as my dad fed the horses, and he'd wait for me to get home from my part time job, well after dark, to leap out at me from his hiding place in the bushes.  Harley was a fun-loving cat, and my only regret about rescuing him was that we didn't get to spend more time with him.

Guido -  Guido was Jeff's cat more than mine when I moved across the continent to move in with them.  He was a loveable, fluffy, enormous cat.  He eventually went to live with Jeff's parents, and lived out the rest of his very happy life that way.  He just passed away last year, probably of age-related complications.  I still miss the big guy.  He is buried in our backyard alongside Romeo, who joined him just a couple of months later.


Annie - Annie is the first mentioned that is still with us.

What can I say about Annie that I haven't said before?  I love her through and through.  I love it when she climbs onto my lap, purring and kneading me with her paws (even though she rarely retracts her claws to do this.)  I love her when she marches in front of me making bossy screeching sounds, at me, at the dogs, at the other cats, sometimes just at life in general.  I love her when I'm petting her, and try to take my hand away and she reaches out to smack me as if to say, "Hey, you're not done until I say so." She is one of the most affectionate cats I've ever had.

Mitchell:  My first foster cat.  I got him and Patches together, when both were under a six month quarantine and just needed someone's extra bedroom to hang out in.  I loved Mitchell, and only the knowledge that he got a good home of his own keeps me from missing him TOO much.  Mitchell is a sweet-tempered cat, and a talker... he would meow and meow just to hear himself make noise sometimes.  He was so laid-back and gentle that even my girl kitties seemed to fall a little bit in love with him...  sometimes we'd come in and find him and Annie snuggled together like best friends.  I think that Annie was a little sad when he left.  Bit was happy, because Bit doesn't really like ANY cats except for Annie and she got all of Annie's attention back.

And then there are the kittens.  Most of the foster kittens that have come through our house have been black.  There was the first litter, which we took in back in December 2011.  Kittens for Christmas, I thought giddily.  What could be better?  What could be better indeed, then SIX black kittens. 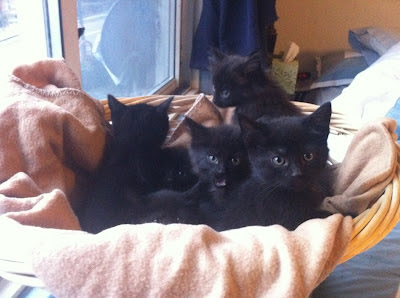 Those kittens were hilarious and energetic, and the defining moment in their stay with me was when I was showering and opened my eyes to see one of them hanging from the shower curtain at eye-level, staring in at me.  Ophelia, Hamlet, Lara, Ellie, Horatio, and Violet.

They were so much fun that I took in even more black kittens in June.  This time it was two black kittens, one tuxie, and one gray, but still... there was some black. 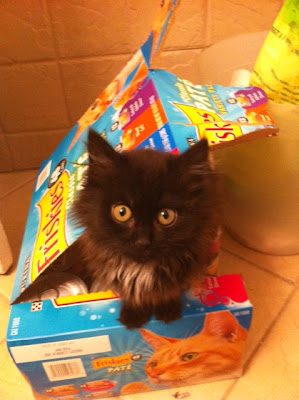 Pictured above:  Storm.  We also had Logan, Rogue, and Jeanie.

And our current litter of foster kittens has two black kittens  in it:  Clark and Amelia.  (The non-black kittens are Lewis and Nellie.) 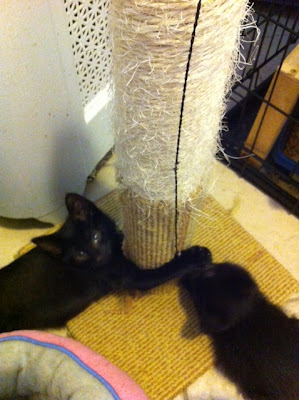 I have loved all three of these litters of kittens so much.  Each kitten has his or her own personality, and each of them has enriched me for having known them.  As have the adult cats.

My point of all of this?  Obviously I think ALL cats of any color are awesome.  But I wanted to give a special hat-tip to the black cats in my life.  There have been many, and I have not regretted knowing any of them.


Posted by House of Carnivores at 6:27 PM