Cripes!  Where did the month of June go?  Apparently, having kittens in the house just eats the days.


OK, it's not all the fault of the kittens.  I will admit it.  Life is just life sometimes, right?

So, to catch everyone up.  I still have the kittens, but not for long.  They're scheduled to return to the shelter next Saturday for their spay and neuter surgeries, and unless something truly odd happens, they'll be staying there at the shelter to go out onto the adoption floor.  Everyone keep their fingers crossed that my little bitties get adopted quickly!  I have gotten so attached to all of them.  They started out as a quartet of frightened, hissy little creatures, but now they purr and snuggle with me, and vie for my attention with one another.  It's adorable, and I'm simply going to have to "suck it up" and take them back to the shelter because no way, no how, is there room for four more permanent residents!

Foster cat Tom is still with us, though he went up on the shelter's Facebook page last week.  This did prompt someone to come and meet him last night, and she's going to let me know her decision in a couple of days.  Keep your fingers crossed for our handsome guy!  I would so love to have him in his very own forever home. 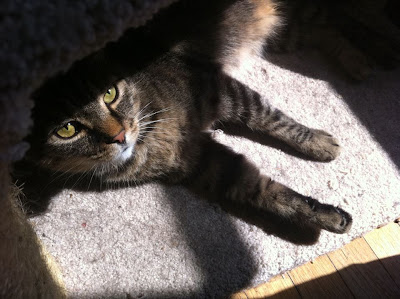 The past week has been an exercise in keeping as cool as we possible can in this heat wave...  I know that some of you midwesterners probably sneer at our "paltry" 96 degrees, but that is the hottest I think I've seen in the eleven years I've lived in Pennsylvania.  Ugh!  We don't have central air in our house (one of the drawbacks to living in an older house with steam heat, I guess) so keeping cool is not always easy.

We have a nice air conditioning unit in our bedroom window, so that we can sleep, and a smaller unit in the study window, so that we can use the computers (and Jeff can work from home) without broiling in a hot room made even hotter by humming electronics.  So during the work day when we're not home, the cats get the air-conditioned bedroom if they choose to go in there, the kittens get shut into the air-conditioned study, and the dogs have to tough it out downstairs.  I worry about them, but I do give them tons of water to drink, and they've got three fans pointing at them.  They seem to be handling it OK. Then of course they get to sleep in the bedroom in their crates at night.

Except that Miss Maera randomly decided that she didn't want to be crated overnight, at the beginning of the week.  She'd whine, whimper, start panting and drooling and shaking all over...  her heart would be racing, and it seemed to me that she was in a full-blown panic attack.  We honestly had no idea of what to do about it.  We didn't want to "cave" and teach her that it was OK to cry to get out of her crate, but we also didn't want her to completely melt down either.

So after a couple of baffling sleepless nights, with one or the other of us downstairs on the couch with her, ascertaining that it wasn't a physical or health thing (I was worried that she was hurt, and for some reason the crate was aggravating a wound or something) we decided to just let her sleep on the bed with us for a couple of nights.

I can see a couple of you wincing about that precedent... except that it hasn't been that bad.  The next night, she slept the entire night inside her crate, with the door open.  Last night she stayed in her crate most of the night, only coming out to jump up with us shortly after 5 AM.

I have no idea of what that was about.  We may try to shut her in again tonight and see how it goes.  Could it have been that for several nights, they were jack-hammering a giant hole in the pavement at the intersection at the foot of the hill?  It WAS loud, and  those WERE the nights that she spazzed out.  And though she mostly calmed down once we let her out, Jeff did report that when he was downstairs with her, she randomly barked out the window.

I'm baffled, and hope that it's resolving soon.  Maera is a dog that really needs to be crated because she's just too mischevious for her own good.  If I'm not awake, I'm not able to keep her from pestering cats, finding yummy trash in our trash cans, and generally terrorizing the household.

So to end this blog post, please enjoy the above short clip of how Maera stays cool in the summer.
Posted by House of Carnivores at 4:53 PM