My foster kittens have, in turns, driven me completely batshit crazy and been a source of calm and soothing for me.  It all depends on the day.

They're actually GOOD little kittens, and I have not had much of a problem keeping them contained and out of danger - maybe being born outside they just had more of a sense of their own mortality than the last batch, which had grown up in someone's home?  They run and romp and play, don't get me wrong, but it isn't the same swinging from the chandeliers type of activity that I had last time.

Ways they have soothed:

1.  I am a feminist and I have a white-hot temper.  It is a bad political season to be a feminist with a white-hot temper, and I often feel like screaming and pulling my hair out by the roots when hearing some of the stuff that's going on lately.  And I think that probably lets people know where I stand without getting too annoyingly partisan about it.  I've come home raging and fuming and stomping my feet.  Jeff, perceiving my weaknesses, sticks a kitten in my arms, and lets a dog lie on top of my feet.  Ahhh... rage drained.    Kittens = Antidote to politics.

Which causes me to forgive them when they lay on top of my dress pants.  I guess I should have been more diligent about picking up my mess, hmm?  I think that Miss Jean here decided that gray pants were perfect for a gray kitten's bed. 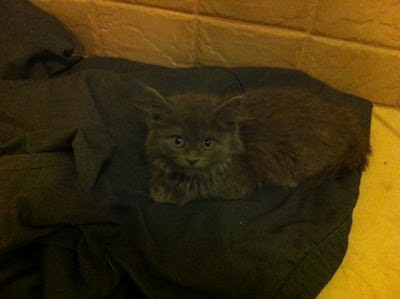 Is that a look of "What are you going to DO about it?" or what?  So young to develop such a 'tude.

2.  They give me an outlet for my mothering.  OK, I don't have kids, and I don't want kids, but that doesn't mean that I don't have an instinct for it.  They are the perfect outlet because they are, let's face it, so needy.  When we got them, it was a victory to get all of them to eat, and I needed to spend oh-so-much time with them, winning their trust.  I can mother my own animals too (and I do) but the little bitties just tug at the heart strings.

And now that they've started to relax enough to play...  I can't help but to be all smiles.


Actually, Foster Cat Tom has been completely adorable.  He, unlike certain other adult cats that I could name, actually LIKES the kittens.  He'll come into their room with me and sometimes groom the tops of their heads, and play with them (and steal their high calorie kitten food.)  They love him, and mob him as soon as he shows his face.  It makes me love him all the more, and I really wish that someone would adopt him so that I don't get irreparably attached.

Ways they are driving me batshit insane:

1.  In the beginning, Jean would not eat food.  This drove me to complete and utter distraction because you could feel her tiny little skeleton and her spine.  She needed to eat or she was going to die.  In desperation, I bought powdered kitten formula and mixed some up with water.  She fell on it with a vengeance and drank to her heart's content.  Ah.  She wasn't as weaned as we'd thought she was.

She's eating food now, by the way.  And she's gaining weight and starting to fatten up.  I think she's going to make it, but I was not entirely certain of that at first.

2.  Jailbreak!  Two of them got out last night, which means my days of keeping them baby-gated into the relatively safe bathroom are over.  Now they're in there with the door closed.  Sigh.  Jean ran down the stairs as fast as her little legs would carry her.  Meanwhile, I saw Argos doing his best impression of a Pointer, staring into the corner behind his crate.  Ah yes, Rogue.

Rogue is the biggest of the litter, and she is indisputably the queen.  (What is it about black and white cats?)  She is the one who will sit at the doorway and demand that I let her through. She is also the biggest.  And the most daring. 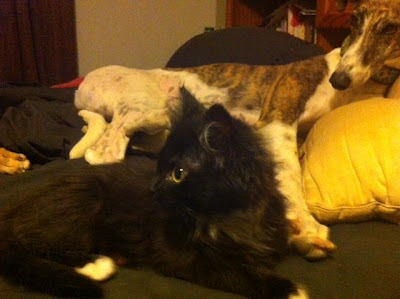 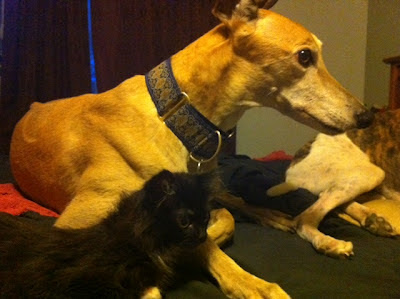 Yeah, Rogue has no fear of dogs, I guess.  Poor Argos is plenty afraid of HER, though.  That's his desperate, "get me out of here" look.

Really, these guys have given me absolutely nothing to complain about.  The best batch of kittens ever.

Last but not least, here is Storm.  She is the one that had the enormous pink bandage on last week.  She still has a bandage, but it is smaller and allows some bend in the leg.  You can't see it in this photo. 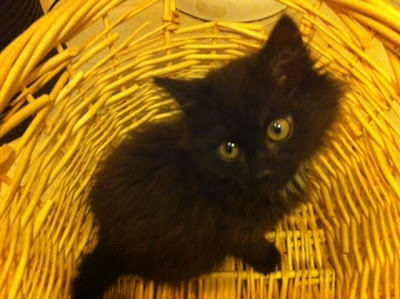 Actually, hurting her leg may have benefited her more than any of us could have thought... it slowed her down just enough that she was the easiest kitten to catch.  So she got more holding and cuddling than the others.  She is, as a consequence, much more tame and easy to handle than the others.  (Don't get me wrong, the others get lots of attention too, and are doing fantastic.  But Storm hits all of her social milestones just a little bit earlier.)

They've come a long way since that first night in my house, with terror in their eyes and no idea at all of what we strange hairless creatures wanted with them. 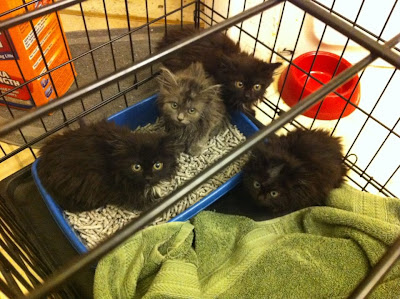 Posted by House of Carnivores at 6:24 PM