Things always get crazy around here when I first take in any new life form...  even if the new life forms are kept completely separate from the other animals, they all KNOW.  So for a couple of weeks after I took in fosters Tom and Junior, all of my animals had to make sure that they were still #1.  They handled it much better this time around, though, so I was pleased with that.  And now it's settling back down to what it was like before...  now we just have two additional cats in the guest room. 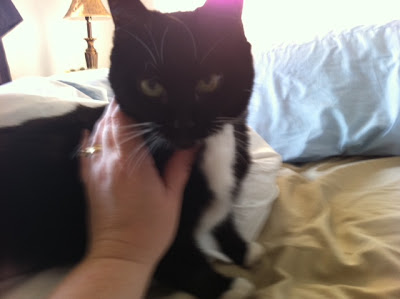 Junior is still very timid, but is coming out of her shell.  She has perfected her head-butt maneuver to assure that she doesn't lose my attention once she gets it.  She jumps up on the bed and purrs and purrs.  Unfortunately, she developed a kitty URI and then had to be taken to the shelter vet clinic for her check-up, so we took a couple of steps back in the "trust" department when I started having to medicate her.  So, so glad that's almost over. 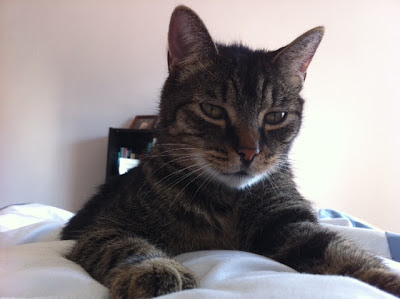 Tom has really come out of his shell, and is a very affectionate, loving guy, who will practically do back-flips to keep your attention on him.  He will sleep on top of me, or sometimes beside me, but all I need to do is look at him an he starts purring and kneading and sometimes showing me his belly for rubbing.  He's also getting more curious about life outside of the guest room...  they were not interested in exploring in the slightest in the beginning.  The only problem?  Every time I open the door to enter or leave, there is a house panther sitting there glaring at him, which intimidates the heck out of him.

The dogs were delighted yesterday, because I brought home a package for them... new collars! 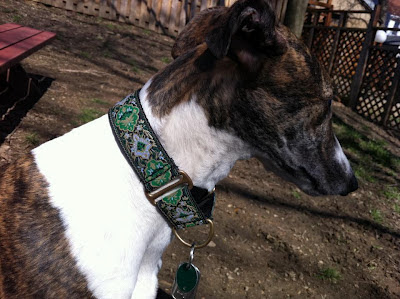 Maera even bypassed the sack containing ground beef, which NEVER happens, because she saw these collars in another bag.  She went right for it. 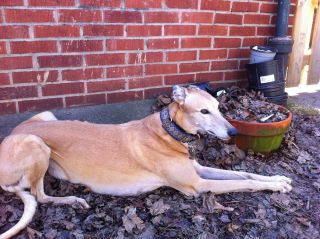 Argos was pleased with his as well.  He let me put it on him, and then preened and arched his neck and wagged his tail.

The special occasion?  Actually, we'd intended to get collars like this for some time now, but either didn't have the money to drop on them, or didn't see any designs that we liked in that moment in time, whatever.  We purchased them at the Golden Bone Pet Resort here in Pittsburgh - the money benefits Steel City Greyhounds, but they are Silk Road collars.  You can buy them on the Web as well if you don't live near here.

There WAS a special occasion, though.  Last night Argos and I went to the Pittsburgh Home and Garden Show to "work" the Steel City Greyhounds booth for a few hours.  He always has a great time meeting people, and did very well.

Maera, who is still timid around strangers, stayed home with Jeff.  Apparently, she was completely heart-broken and cried most of the night.  We are going to start taking her to meet and greets next month - maybe for shorter durations than normal in the beginning.  But the home show was going to be far too much too soon.  It's quite the event, but not one for a dog with some fear of people.

I'm hoping for a quiet week.  Argos has to go to the vet on Tuesday, for a dental cleaning.  The poor guy just had to have one last year, but his teeth are phenomenally bad, despite the work that I put into keeping them up this year.  It will take him at least a day to recover from that, so I'm hoping that Maera can entertain herself for awhile.  I guess we'll see!
Posted by House of Carnivores at 6:29 AM